First-ever black hole discovered in 1964 dubbed as Cygnus X-1 is about 50 percent more massive, roughly 21 times the mass of our own Sun, a new study found

First-ever black hole discovered by scientists in 1964 is much more massive than previously known, according to a new research. Dubbed as Cygnus X-1, the black hole that made mention with respect to physicist Stephen Hawking’s bet during quantum effects discovery, is about 50 percent more massive, roughly 21 times the mass of our own Sun. As per the new observations made by scientists, the heaviest stellar black hole of the universe, observed without using gravitational waves, is nearly 1.5 times heavier, a new study published in the journal Science revealed.

The newly updated mass of the gigantic celestial object has stunned the astronomers that have now raised fresh questions about how the black hole–forming stars evolve. “The updated mass measurement of Cygnus X-1 is a big change to an old favourite,” Tana Joseph, an astronomer at the University of Amsterdam reportedly said. Stephen Hawking had made a famous bet with physicist Kip Thorne that the Cygnus X-1 system, discovered in 1964, did not include a black hole. Later, in 1990, scientists had accepted that Cygnus X-1 contained the first known black hole in the universe. 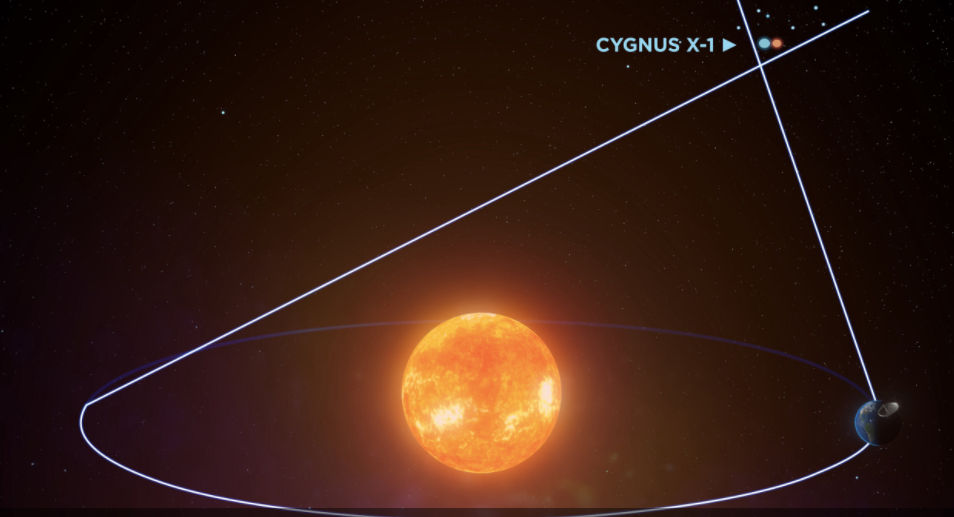 [Astronomers observed the Cygnus X-1 system from different angles using the orbit of the Earth around the Sun to measure the perceived movement of the system against the background stars. This allowed them to refine the distance to the system and therefore the mass of the black hole. Credit: International Centre for Radio Astronomy Research.]

Do you love black holes as much as we do? Scientists, including some from #theobservatory found out that the black hole in Cygnus X-1 is more massive than previously thought. Head over to our news page for more info! © International Centre for Radio Astronomy Research #unifau pic.twitter.com/cUtJwY98so

New telescopic observations of the double-star system Cygnus X-1, located within the Milky Way in the constellation of Cygnus, the Swan revealed that it was actually located 7,240 light-years away, than previously estimated distance of 6,070 light-years from Earth. The black hole’s characteristics are calculated based on distance, and the new calculation argues that Cygnus X-1 is quite a bit larger than scientists had realized, the study purported.

This also changed science’s analysis of how the giant stars gave rise to black holes. Using a parallax technique, scientists examined the Cygnus X-1, against the background. The light emitted from the black hole's companion star helped the researchers estimate the star’s diameter, using which, scientists calculated the black hole's mass, which turned out to be about 14.8 times the size of the sun. The discovery was made using Very Long Baseline Array (VLBA), a giant radio telescope, in a 12-hour-long observation conducted alternate days.

New @ScienceMagazine paper w/@CurtinUni @ARC_OzGRav @MonashUni: The black hole in the Cygnus X-1 system is much bigger than we thought. To form such a massive black hole, astronomers had to revise estimates of how much mass stars lose via stellar winds.https://t.co/a0OcdNpZX9 pic.twitter.com/9IE8CYmNgI