The black tigers basically are Bengal tigers with a single base mutation in the gene Transmembrane Aminopeptidase Q (Taqpep), said the experts. 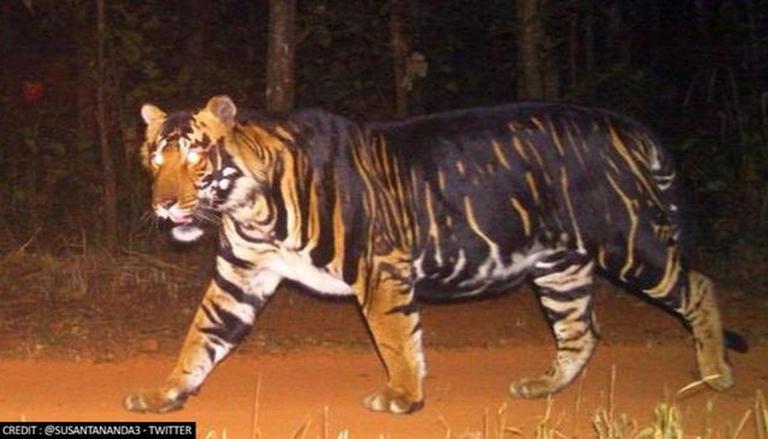 
The National Centre for Biological Sciences (NCBS) has decoded the mystery of Odisha's black tigers as they explained what causes their fur to appear totally dark. A team led by ecologist Uma Ramakrishnan discovered that the tigers of Similipal National Park, who were once considered mystical, underwent a mutation due to a change in the Transmembrane Aminopeptidase Q (Taqpep) gene. The NCBS said that mutation in the gene seems to cause the tigers’ distinctive black stripes to broaden and spread into the orange-brown background, occasionally turning some parts of the tigers’ pelt entirely black.

The NCBS, on its official website, explained that the black tigers are mutants as they basically are Bengal tigers with a single base mutation in the gene Transmembrane Aminopeptidase Q (Taqpep). Different mutations in this gene are known to cause similar changes in coat colour in several other species of cats including cheetahs (where it causes the blotchy and striped patterns seen in king cheetahs) and splotchy markings in feral tabby cats in California. In black tigers, a mutation in the gene seems to cause the tigers’ distinctive black stripes to broaden and spread into the orange-brown background, occasionally turning some parts of the tigers’ pelt entirely black, according to the official report. Published in the journal Proceedings of the National Academy of Sciences, the researchers also tried to find out why this mutation occurred at such a high frequency in Similipal alone.

The findings suggested that the darker coat colour of the mutants offers them a selective advantage when hunting in the dense closed-canopy and relatively darker forested areas of Similipal as compared to the open plains of most other tiger habitats. However, the results of additional genetic analyses coupled with computer simulations indicate that a small founding population and prolonged isolation from other tiger populations in India is likely to be the main reason for the occurrence of black tigers in Similipal. Due to this geographic isolation, genetically related individuals have been mating with each other for many generations in Similipal, leading to inbreeding, revealed the research. Raising alarms for tiger conservation, the research also warned that such outnumbered isolated species of tigers are at the highest risk of extinction.