NASA’s Hubble Telescope that has its eyes fixed on Jupiter for over a decade now has caught another disturbance in the planet’s famous Giant Red Spot. 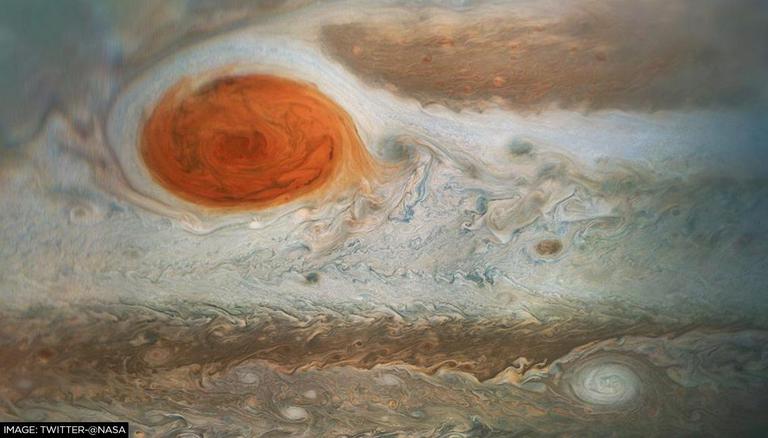 
NASA’s Hubble Telescope that has its eyes fixed on Jupiter for over a decade now has caught another disturbance in the planet’s famous Giant Red Spot. NASA said that Hubble’s observations revealed speeding of the winds in the spot’s outermost lane. The spot is fairly significant as it is bigger than the Earth and has been observed by humans for over 150 years now.

This region of the gaseous giant Jupiter has fascinated scientists for a long time owing to its massive size, crimson-coloured clouds and winds that swirl at about 643 kilometres per hour. According to NASA, the already superfast winds within the boundaries of the storm, a region called high-speed ring, has increased by 8% in just 12 years i.e 2009-2021, as per Hubble's regular "storm reports".

However, scientists were baffled when they found relatively slow-moving winds near the red spot’s innermost region. NASA revealed that lead researcher and University of California’s Michael Wong said, “When I initially saw the results, I asked 'Does this make sense?' No one has ever seen this before," and attributed the discovery to Hubble’s longevity.

READ | In a first, astronomers find Iron on new 'Ultra-hot' Exoplanet, twice the size of Jupiter

He stated that the average wind speed was constantly increasing since the last decade and informed about a 2017 two-dimensional wind map, an analysis of which uncovered disruptions in the clouds during a nearby convective storm. Although Wong ran a thorough analysis on Hubble’s data over the changing wind speeds on Jupiter, he said that diagnosis of it is still a tough task. He accredited the tough task to the opaque cloud tops which make it hard for Hubble to peep in.

Earlier analyses by scientists have found that the storm in the red spot is changing its shape from oval to circle and is also shrinking in size. Although, the spot still has a diameter of 16,000 kilometres which is big enough to fit one Earth inside it, said NASA.

Meanwhile, weighing on Hubble’s abilities, Wong revealed that the scale of change in wind speed is nearly 2.5 kilometres per hour which would’ve gone unnoticed if it wasn’t for the telescope. Moreover, he also said that this new data will help to understand the energy source for the Red spot’s storm and the secret behind its longevity.