According to a NASA team, organic or carbon-containing salts are possibly present on Mars, which has implications for the past habitability of the Red Planet. 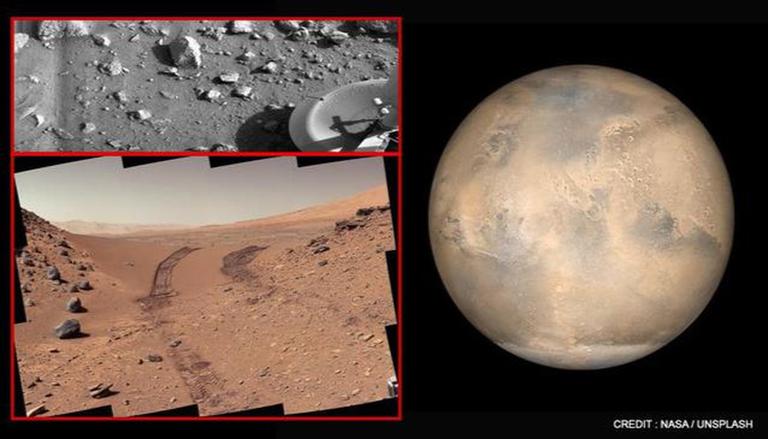 
In the latest research, NASA scientists have found that organic salts are probably present on Mars. These salts are the chemical traces of organic compounds found previously by NASA's Curiosity rover, similar to shards of archaeological evidence. Organic compounds and salts found on Mars may have evolved as a result of geologic processes or could be the remains of ancient microbial life. According to the US space agency, direct detection of organic salts will help modern-day Martian habitability, as certain species on Earth can use organic salts for energy, such as oxalates and acetates.

"If we determine that there are organic salts concentrated anywhere on Mars, we’ll want to investigate those regions further, and ideally drill deeper below the surface where organic matter could be better preserved." NASA quoted James MT Lewis, an organic geochemist who led the research, as saying.

As per the information shared by NASA, Lewis' lab experiments and data analysis from Curiosity's Sample Analysis at Mars (SAM), a portable chemistry lab within the rover's belly, leading to the presence of organic salts. However, using instruments like SAM, which heats Martian soil and rocks to release gases that expose the composition of these samples, directly identifying them on Mars is difficult. The problem is that heating organic salts only releases basic gases, which could be emitted by other Martian soil additives.

The space agency briefed Lewis and his team that another Curiosity device, the Chemistry and Mineralogy instrument, or CheMin for short, which uses a different technique to peer at Martian soil, could detect certain organic salts if they are present in sufficient quantities. However, CheMin hasn't found any organic salts yet.

On the surface of Mars, where billions of years of radiation have erased or broken off organic matter, it is a difficult challenge to find life. According to NASA, Curiosity gathers Martian soil and rocks, which may contain tiny bits of organic compounds, similar to an archaeologist digging up fragments of pottery and then uses SAM and other tools to determine their chemical composition.

In its official release, NASA said, "Using data that Curiosity beams down to Earth, scientists like Lewis and his team try to piece together these broken organic pieces. Their goal is to infer what type of larger molecules they may once have belonged to and what those molecules could reveal about the ancient environment and potential biology on Mars."

While some scientists have predicted that ancient organic compounds are preserved on Mars for decades, Curiosity's SAM experiments were the first to confirm this, stated NASA. In 2018, astrobiologist Jennifer L Eigenbrode of NASA's Goddard Space Flight Center led an international team of Curiosity project scientists in reporting the discovery of a slew of molecules containing carbon, a key component of life. Reportedly, Most carbon-containing molecules are classified as "organic" by scientists.

READ | Mars mushrooms? Here are unexplainable incidents that could be signs of alien existence

However, according to the new study, the discovery of organic matter in 3-billion-year-old rocks at the surface is a very positive indication that scientists will be able to extract more knowledge from better-preserved samples under the surface. As per reports, ExoMars, the European Space Agency's rover that will drill down to 6.5 feet (2 metres) on Mars, will carry a Goddard instrument that will study the chemistry of these deeper Martian layers.