NASA has tried to solve the mysteries about spiral galaxies and the faint stars and gases surrounding galaxies like our own using simulations. 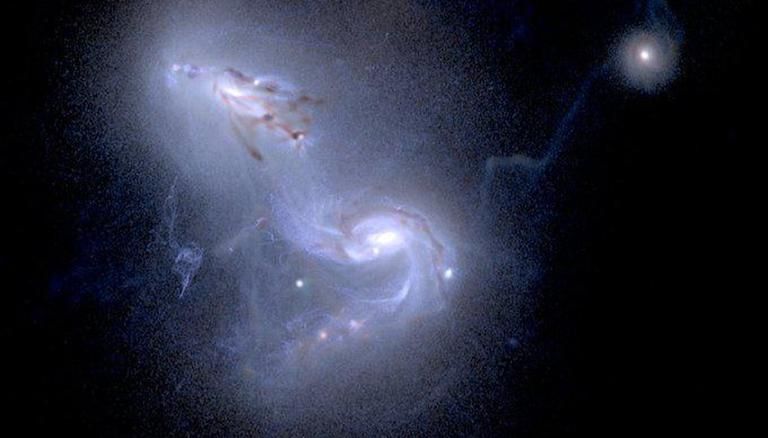 
The Milky Way galaxy is a spiral one with billions of stars. However, scientists are still trying to figure how galaxies evolve into starry spirals. Stepping up against the query, NASA has tried to solve the mysteries about the faint stars and gases surrounding galaxies like our own using simulations. Using the Pleiades supercomputer at the NASA Advanced Supercomputing facility at California-based Ames Research Center and by analysing the data obtained by the Hubble Space Telescope, scientists simulated a Milky Way-like galaxy in the early stages of a collision with another smaller galaxy.

How does a galaxy evolve into a starry spiral?

With the help of data from Hubble, scientists used a supercomputer to simulate a galaxy like our own Milky Way in the early stages of a collision with another smaller galaxy.

Detailing the experiment, NASA said in its statement,

The visualization revealed a detailed “fossil record” of information about the simulated galaxy's history. Basically, when we gaze at the halo of stars and luminous clouds of interstellar dust surrounding a galaxy's milky multitude, we're seeing remnants of smaller, neighboring galaxies that were shredded by galactic mergers.

The scientists found that crashes between two galaxies throw many faint stars into enormous wide orbits and ultimately push them out in the far-flung areas of the galaxy. It was also observed that the outlier stars sometimes form streams that wrap around a larger galaxy and last billions of years. NASA says that data from these simulations will help scientists make predictions about how to detect and trace the histories of the stellar streams emerging from the outlier stars. Besides, these streams might also reveal crucial information about the galaxies that made them, and even the streams around our own Milky Way. According to the agency, the James Webb Space Telescope and the Nancy Grace Roman Space Telescope are expected to offer a detailed look at the stellar halos of dozens of nearby galaxies for the first time.

Jointly developed by NASA, ESA and CSA, the Webb telescope is the most powerful telescope ever built. It is scheduled to launch on December 18 from Europe’s Spaceport in Kourou, French Guiana and will provide greater insights into the origin and evolution of the universe. Tap here to know more about the telescope.

Preview the science of the world’s most powerful space observatory at @NASA’s upcoming virtual media briefings, happening Nov. 18 at 11 am & 2 pm EDT.

The Roman Space Telescope, which is scheduled for launch in 2027, will be developed to reveal secrets of dark energy and dark matter, discover planets outside our solar system, and address a host of other astrophysics and planetary science topics. According to NASA, this telescope will be one of the most important tools ever-built for studying the universe.

Later this decade, @NASARoman will survey the universe and take staggering observations of wide swathes of space. Imagine dozens of Hubble deep fields in a single image!