NASA has released a stunning image of galaxies merging 140 million light-years away from Earth. Here is more information about the same, read on. 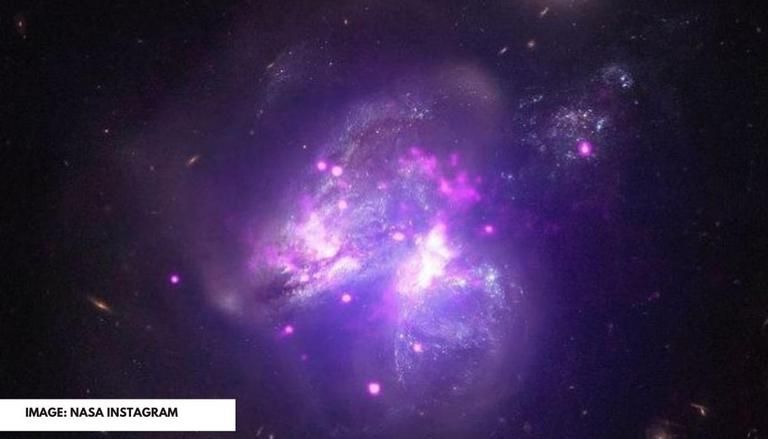 
Another stunning image of two spinning galaxies merging in a galaxy system 140 million light-years from Earth has been released by NASA. Shockwaves vibrate across both galaxies as they merge, triggering waves of fresh star formation, according to the American space agency. Some of these stars are enormous, and their lives are brief but violent. Two oval-shaped items in close proximity release bundles of blue X-rays that brighten the surrounding areas, according to the photograph. 25 strong X-ray sources are scattered throughout the galactic system, according to data from NASA's Chandra Observatory.

The galaxy system recorded by NASA's space-based observatories is designated Arp 299. NASA took to their Instagram handle and posted a picture with the caption, "Blended, not stirred, please." 14 of the 25 X-ray sources in the photograph are so bright that they are classified as "ultra-luminous X-ray sources," or ULXs, by astronomers.

The caption further read, "Shown here we see Arp 299, a galactic system located about 140 million light-years from Earth that contains two swirling galaxies merging. As two become one, shock waves rumble through both galaxies and trigger waves of new star formation. Some of these stars are very large and live brief and violent lives.

Data from @nasachandraxray reveals 25 bright X-ray sources sprinkled throughout. Fourteen of these sources are such strong emitters of X-rays that astronomers categorize them as "ultra-luminous X-ray sources," or ULXs. These ULXs are likely binary systems where a black hole or neutron star is pulling material from a companion star.
This composite image contains X-ray data from Chandra (pink), higher-energy X-ray data from NuSTAR (purple), and optical data from the Hubble Space Telescope (white and faint brown)". Check out the post of the same below.

Astronomy fans flocked to the photograph shortly after it was shared on social media to marvel at the beauty of this celestial activity. The photograph wowed the majority of Instagram users, who commended its quality. Within 24 hours, the photograph garnered over 6,41,000 likes.

The Violent Life of Cosmic Fusion

As the two galaxies joined intimately, shockwaves rumbled through the universe, generating waves of new star formation. Some of the stars are massive, and their lives are brief but violent. On NASA's Instagram feed, the image of these merging galaxies was captioned, "Blended, not stirred, please."