NASA took to its official Twitter handle to explain the source of the rainbow and clarify the doubts about whether or not a rainbow can appear on Red planet.

NASA on Tuesday lent an explanation about the Mars Perseverance rover’s image of a “rainbow on Mars” that has caused a stir online. Taken by its rear Hazard Avoidance Camera HazCam, the new stereo image, acquired on April 4, 2021, at the local mean solar time of 15:14:09.depicts a vibrant ‘rainbow like’ arc in the background stretching across the horizon. Many on social media speculated that the image featured a rainbow on Mars while others argued that it was impossible to find a rainbow on the Martian surface as the planet does not have water droplets in the atmosphere and sunlight is needed to create a rainbow. Some called the rainbow arc a Dustbow, others suspected if the Red planet hosted leprechauns. Although, one question unanimously asked by the viewers of the image was ‘What would cause that kind of refraction in Mars' atmosphere that has no water?’

NASA on Tuesday took to its official Twitter handle to explain the source of the rainbow and clarify the doubts about whether or not a rainbow can appear on the Martian surface. The Red planet’s surface is mostly cold and extremely dry, therefore, the chances of the image being of an actual rainbow are nil, explained NASA. The space agency said that the rover’s Hazard Avoidance Camera did not capture a rainbow on the planet’s arid surface, as there is no rain or vapours as such on Mars. “Rainbows aren't possible here. Rainbows are created by light reflected off of round water droplets, but there isn't enough water here to condense, and it’s too cold for liquid water in the atmosphere. This arc is a lens flare,” NASA said. 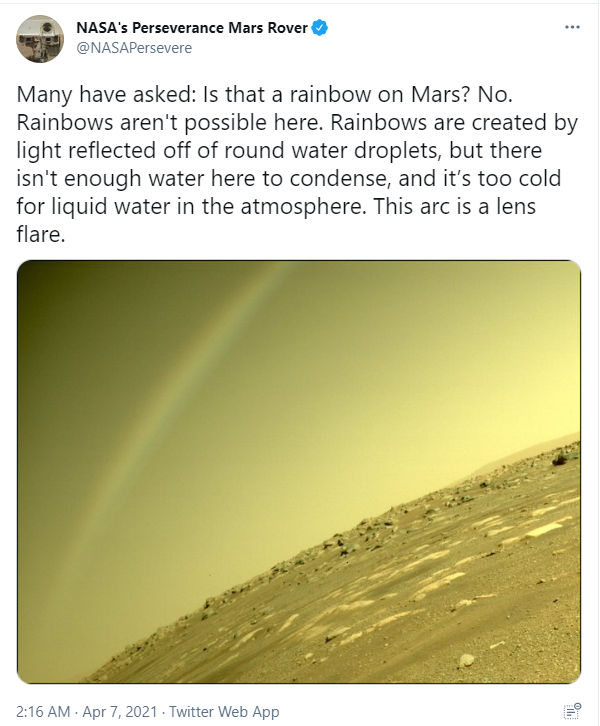 'Has winds, no rainbow'

There have been intriguing images of Mars that have drawn the attention of the astrophiles from time to time. Earlier similarly, in search for traces of life on the Red Planet, NASA’s Mars rover Curiosity captured a ‘dust devil’ swirling through Gale Crater. The rover interestingly spotted a faint dust of seemingly dangerous vortices whirling between dark and light slopes on a 96-mile-wide (154 kilometers)  site located on the equator of Mars. According to NASA astronomers,  Mars is a dynamic planet and has a unique atmospheric interaction with the surface. While Mars has spinning, columnar vortex of wind known as a "dust devil", there is no possibility of spotting a rainbow on it.