Richard Branson Writes To His Mother, Says 'before The Word Existed,you Were Entrepreneur'

In thoughtful letter to his mom, Richard Branson mentioned a proverb worth pondering on, "the brave may not live forever, but the cautious don't live at all." 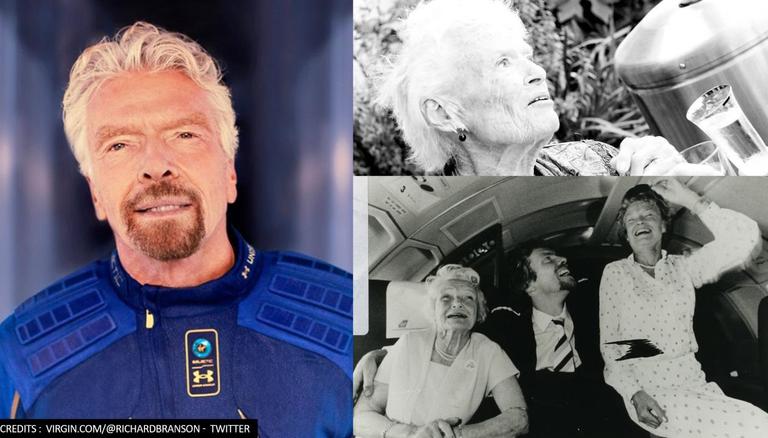 In an interesting development, business tycoon Richard Branson penned a letter to his late mother, Eve Branson, before he took off in his own spaceflight Virgin Galactic VSS Unity, on July 11. In the thoughtful letter, he mentioned a proverb worth pondering on, "the brave may not live forever, but the cautious don't live at all."

An excerpt from the letter read, "You were always an adventurer, you took glider lessons dressed as a boy, enlisted during World War II. Before the word existed, you were an entrepreneur."

"The brave may not live forever, but the cautious don't live at all," he added.

On Sunday at 20:00hrs, his Virgin Galactic rocket plane took for a 1.5-hour mission in a bid to see the space at an altitude where the Earth's horizon curves are vivid despite the distance. The entrepreneur had said that he wanted to evaluate the experience before boarding paying customers next year. Virgin Galactic founder carried Indian-American crew member Sirisha Bandla on his shoulders while celebrating the historic spaceflight of his company’s vessel to the edge of space. VSS Unity blasted off from New Mexico finishing the first successful fully crewed private mission. The Indian-American’s role was that of a researcher experience. While Branson hailed the mission as his dream of 17 years being completed, he celebrated the moment by inspiring words and also by carrying Bandla on his shoulders as smiles beamed across the area.

READ | Richard Branson is set to take off into space; but did you know he has Indian ancestry?

On his blog, popularly known as Richard Branson's Blog, he had posted detailed writing about his bond with his mother. He is often heard or seen speaking fondly about her and stating that his mother has been his biggest inspiration. Branson's post read,

"My mother, Eve, is my biggest inspiration, my most encouraging champion, and my greatest sounding board. On top of helping me chart my path to success, she’s been very successful herself – a pioneering entrepreneur in her own right.

Now in her 90s, most people would relish in some downtime, but my mum has other ideas… As well as spending time with her three new great-grandchildren, she’s also working hard as the Founder of the Eve Branson Foundation. With a mission to improve the lives of women and young girls in the Atlas Mountains of Morocco, the Eve Branson Foundation provides access to education and health care to those in need.

Your guidance and love have enabled me to see strength and ability in all women. From my wife, Joan; to my sisters Lindy and Vanessa; and my daughter Holly and daughter-in-law Bellie (two new mums!); to all the amazing women who work tirelessly and passionately to contribute to the Virgin journey – I am surrounded by women, whose impact on the world is thrillingly exciting.

I tell my mother that I love her and respect her at every chance I get – and I hope you do too. Days like Mother’s Day and International Women’s Day shine a great spotlight on the wonderful character of women, but they should not be seen as an exclusive opportunity to show admiration and praise."