He rides the newly resurrected ice-dragon Viserion, steadily moving towards Winterfell bringing death in his wake. His army of dead trudges slowly towards the living. In Westeros, may be...

He rides the newly resurrected ice-dragon Viserion, steadily moving towards Winterfell bringing death in his wake. His army of dead trudges slowly towards the living. In Westeros, may be...

But in another 'North', in Norway, he is locked up in jail. Winter is not coming there.

The police department in Trondheim, Norway has announced in a post on Facebook, that their 'night watch' has “arrested” the blue-eyed leader of the White Walkers. The post was put up right after Game of Thrones' season eight's first episode aired. The police posted photos of them detaining a man dressed like the Night King, the threat to the show's living characters and a probable choice of ruler to sit on the throne, commanding his ever-increasing army of undead creatures, vulnerable only to 'dragon glass' and fire. 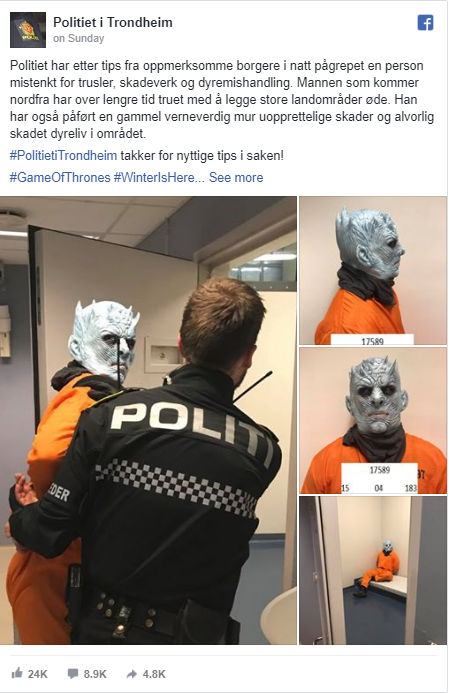 The post released by 'Politiet i Trondheim' or Trondheim Police read:

"The police have received many complaints about a man from the northern region involved in criminal activity. Complaints include animal cruelty and property damage (there have been reports of a wall being destroyed), as well as threats to lay vast areas of land desolate. Our night watch has now apprehended the man to deter any further criminal activity on his behalf."

This 'mock arrest' was an initiative by the Trondheim Police to engage with their local residents and the social media users, so as to use their help in apprehending real fugitives in the future. Markus Ree, superintendent of Trondheim Police’s fifth division, told Newsweek that a young officer donned the Night King mask for the mock arrest.
"Funny posts like this one help engage social media users. That’s useful when we later ask for help solving crimes or searching for missing persons,” he said.

Read | Soft-drink giant cashes in on Game Of Thrones fandom, launches 'A Can Has No Name'

Just like the Trondheim Police department, many brands and government departments have cashed in on the popularity of the show:

Budlight created an ad based on the 'Jon Snow' resurrection.

Been dead for a while. SOMEONE TELL ME WHAT I MISSED?! pic.twitter.com/cQgBn89YBh

Sharing a picture of The Wall, the Mumbai Police also tweeted, "We make sure, what lies ‘beyond the wall’ never intrudes into our city! "

We make sure, what lies ‘beyond the wall’ never intrudes into our city! #WeGOTYourBack #WallOfSafety pic.twitter.com/asyJtbUWrH

The final season of the popular HBO-produced TV series Game of Thrones (GOT) started with its first episode aired on 14th April, 2019.