The Ministry of Electronics and Information Technology on Wednesday wrote a letter to the social media platforms including Facebook and Twitter.

In the letter the Ministry further stated that the government through a separate notification has also prescribed that a social media intermediary having 5 million users in India will be considered a Significant Social Media Intermediary (SSIM). The Government reserves the right to seek any additional information, as may be permitted within these Rules and the IT Act. 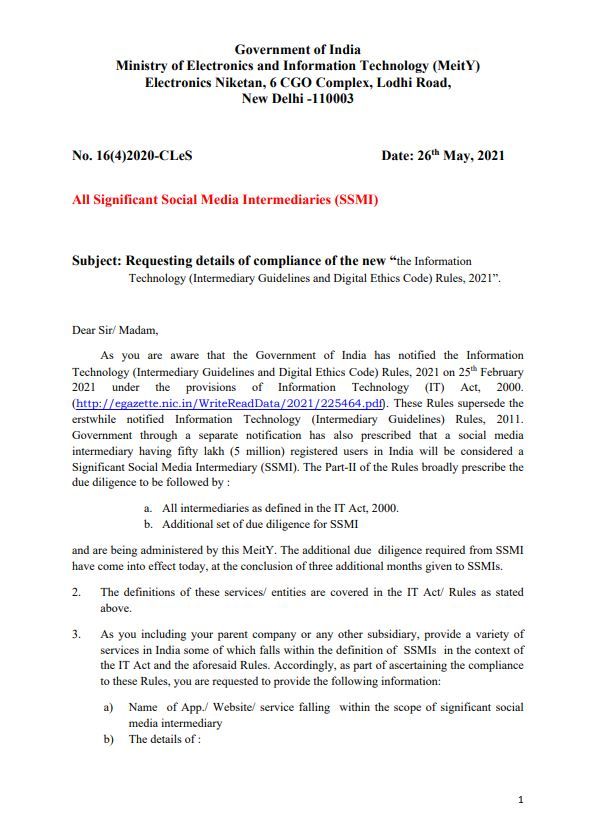 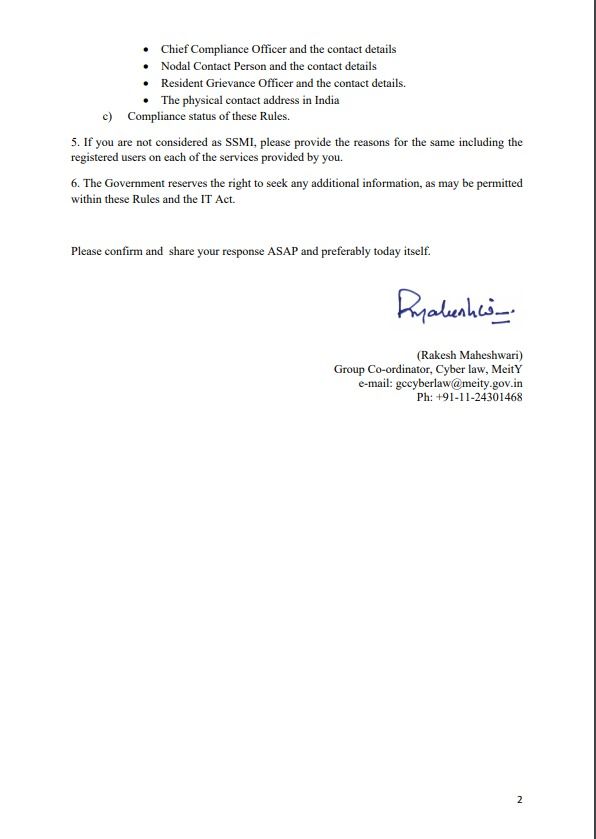 The Ministry of Electronics & IT had also responded to WhatsApp's allegations over the new IT rules and categorically stated that the Union Govt respected privacy & had 'no intentions to violate it when WhatsApp was required to disclose the origin of a message'. Reiterating the govt's commitment to ensure the Right to Privacy, Union Minister Ravi Shankar Prasad assured WhatsApp that its normal functioning will not be affected by the implementation of the new IT rules. A press release from the Ministry of Electronics & IT quoted Union Minister Ravi Shankar Prasad saying, “the Government of India is committed to ensure the Right of Privacy to all its citizens but at the same time it is also the responsibility of the government to maintain law and order and ensure national security.” Accordingly, it has assured that if details are sought to determine the originator of a particular message, it would only be so as a last resort, and will appropriate legal authorisation seeing as it would entail a 'reasonable restriction' in the fundamental right to privacy.

WhatsApp moved the Delhi High Court challenging the Centre's recent rules for social media intermediaries that call for the traceability of messages. The Facebook-owned messaging platform reportedly filed the petition on May 25, which was the last day to comply with the guidelines. Invoking the Supreme Court's verdict in the 2017 Justice K S Puttaswamy (Retd.) vs Union Of India case, it has argued that the traceability provision is against the fundamental right to privacy.

READ | Ryan Sutter opens up about his health on social media, says 'Things are looking up'

In its petition, WhatsApp has sought direction from the court to declare the traceability provision unconstitutional and prevent criminal liability to its employees for non-compliance. Incidentally, the messaging platform's move comes a day after Facebook expressed intent to comply with the provisions of the new IT rules. Mentioning that it will continue to discuss some issues with the government, a Facebook spokesperson stressed that the people can continue to freely and safely express themselves on the platform. Meanwhile, the government's acrimony with Twitter over this matter continues as there is no confirmation yet on whether the microblogging platform has complied with the rules either, even as it grapples with the Delhi Police over the 'toolkit' manipulated media row.

WhatsApp has alleged that the new IT rules violated the fundamental right to freedom of speech & expression and that it even 'chills' lawful speech. Refusing to comply with the new IT guidelines, WhatsApp argued that the citizens wouldn't speak freely fearing traceability and claimed that it was antithetical to end-to-end encryption. It further stated that imposing a requirement to enable the identification of the first originator of information would undermine security protocol. In its petition challenging the new IT rules at Delhi HC, WhatsApp has sought the new guidelines to be declared unconstitutional & illegal and wanted zero liability imposed on it for not complying with the new rules.