If you have been wondering why God was not responding to your prayers lately, it was because Twitter had suspended 'God'.

If gay people are a mistake, they're a mistake I've made hundreds of millions of times, which proves I'm incompetent and shouldn't be relied upon for anything.

Twitterati Seemingly In Line With Sundar Pichai’s India Vs Eng Cricket World Cup 2019 Prediction, Are You

This 'controversial tweet' was reported by users and Twitter suspended the account deeming it violated Twitter's rules against “hateful conduct”.  The micro-blogging site explained, “You may not promote violence against, threaten, or harass other people on the basis of race, ethnicity, national origin, sexual orientation, gender, gender identity, religious affiliation, age, disability, or serious disease.” 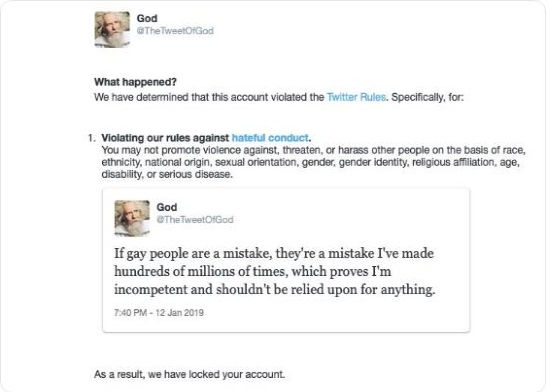 The ironically named account handled by David Javerbaum, who was a writer and producer on ‘The Daily Show’ and ‘The Late Late Show with James Corden’, has more than six million followers and is famous for its agnostic comments. While Twitter users have complained many times about its controversial tweets, this is the first time it got locked.
Soon, after users started bombarding Twitter with requests to unlock the account, Twitter sent an apology to 'God' saying that they have seen the error in their ways, writing: 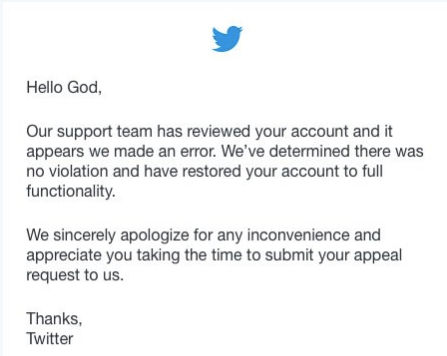 While God is known to forgive and forget, Twitter's 'God' was not so compassionate saying that it was too late, threatening that by the time he was done with them, MySpace would laugh at their relevance.

Don't try to make all kissy-kissy with Me now, Twitter. It's too late.

You messed with the wrong Near Eastern Bronze Age sky-father-king projection.

By the time I'm done with you, MYSPACE will laugh at your relevance. pic.twitter.com/5tasH3X0t4

His Twitter devotees have rejoiced at his wit tweeting:

You know, there was a time when you would have smited/smote/smat* them for less. Have you gone soft in the 6000 years that you've existed?

As penance, @Twitter should give You that blue check mark.