Head of Egypt's antiquities sector at the Supreme Council of Antiquities, Dr. Ashmawi, said that tombs are oval-shaped pits cut in the island's sandy layers.


Archaeologists in Egypt have unearthed nearly110 burial tombs at an ancient site in a Nile Delta province, the Tourism and Antiquities Ministry said in a statement on Tuesday. Some of the graves discovered at the Koum el-Khulgan archaeological site in Dakahlia province were found still carrying the human remains inside. The tombs were located approximately 150 kilometers northeast of Cairo, the ministry said, adding that at least 68 of these oval-shaped tombs belonged from the Predynastic Period that spanned between 6000-3150BC.

As many as 37 rectangular-shaped tombs from an ancient era known as the Second Intermediate Period (1782-1570BC) were also unearthed. This dated back to the period when the Semitic of Hyksos ruled ancient Egypt, the ministry informed. The remaining graves were found to belong to the Naqada III period that thrived between 3200BC to 3000BC. Inside these ancient mystical tombs, archaeologists found human remains of adults and children as well as the funerary equipment and pottery objects, the Tourism and Antiquities Ministry said.

Secretary-General of the Supreme Council of Antiquities, Dr. Mustafa Waziri said in a Facebook post that this discovery is an important historical and archaeological addition to the site, where among the tombs found are 68, dating back to the period of the civilization of Lower Egypt. And as many as five tombs from the era of Naqada III and 37 tombs from the era of Hyksos were dugout. “The excavations will continue to reveal more secrets from this region,” he said. 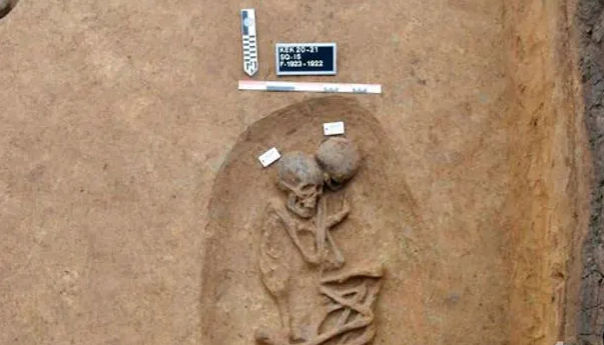 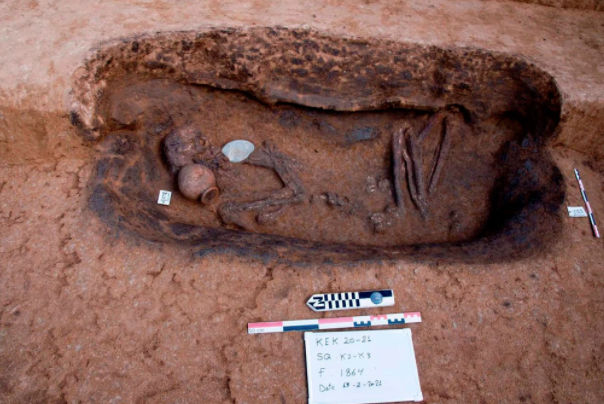 [An ancient burial tomb unearthed recently with human remains and and pottery. Credit: Egyptian Tourism and Antiquities Ministry via AP]

Uncovered remains of a baby

Meanwhile, the head of the Egyptian antiquities sector at the Supreme Council of Antiquities, Dr. Ayman Ashmawi, said that tombs are oval-shaped pits cut in the island's sandy layer and contain people buried in a squatting position, most of whom lay on their left side with their head pointing westward. Archaeologists uncovered the remains of a baby buried inside a pottery vase from the Bhutto 2 period, a small pot of spherical pottery was placed with it. A pottery coffin was found inside a burial ground for a child, two brick tombs in the form of a rectangular building with the children's burials and some funeral furniture, including a small pottery vase and silver rings, as well as the remains of a baby buried inside a large pottery pot were also excavated. The funerary furniture was placed inside the pot, which was represented in a small black pottery vase. 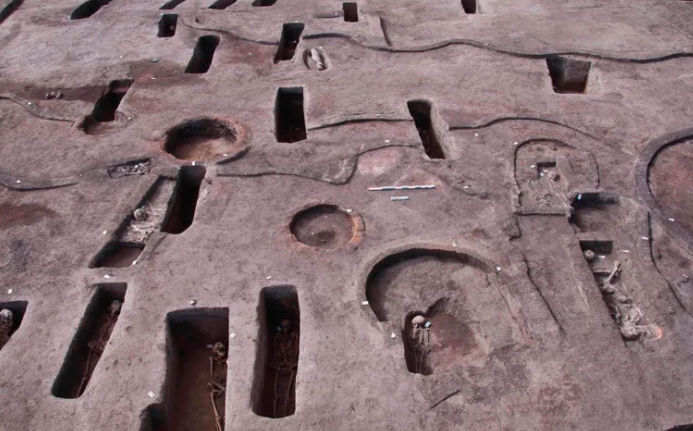 [The graves were found at the Koum el-Khulgan archaeological site in Dakahlia province. Credit: AP]