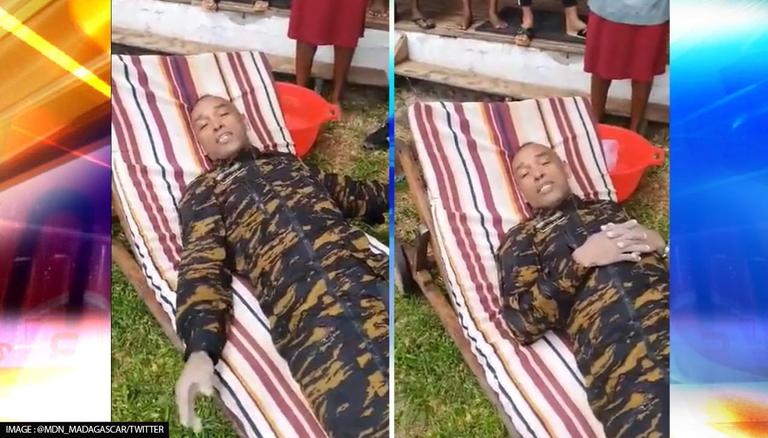 
After a helicopter crashed at sea during a rescue attempt, a Madagascan minister had survived after swimming for at least 12 hours to shore on Tuesday. GDI Serge Gelle was one of the passengers from the helicopter crash who was discovered safe and sound near Mahambo Town. The cause and reason for the chopper disaster are unknown, however, the 57-year-old, Gelle informed that he swam to Mahambo from 7:30 Monday night till 7:30 Tuesday morning. He further stated that he had no injuries following the incident, but that he was cold, as per BBC.

During the time of the disaster, the plane was carrying four passengers. Apart from Gelle, a warrant officer named Laitsara Jimmy Andrianarison was discovered alive on Tuesday, shortly after the collision on Monday evening, The Cable reported. According to video footage which has been uploaded on Twitter, it can be seen that the Madagascar minister was laying on a deck chair, still in his camouflage uniform.

'I am alive and well': Madagascar minister after helicopter crash

Further, Serge Gelle said, "I would just like you to broadcast this video for my family to see, my colleagues to see, the government members to see. (I am) alive and well," BBC reported. In a tweet, the Madagascan defence ministry stated that the search and rescue operation for the two remaining passengers in the helicopter is underway. The helicopter carcass has also been discovered at the bottom of the water, the ministry added. Furthermore, Gelle had used one of the helicopter's seats as a flotation device, according to Zafisambatra Ravoavy, a senior police officer, The Cable reported.

The chopper was believed to be carrying him and the other passengers to see the scene of a shipwreck that killed approximately 21 people and left another 60 missing on Monday. A cargo ship carrying 130 illegal migrants sunk off Madagascar's northeastern coast. Since the horrific tragedy, officials confirmed on Monday that 68 additional people had gone missing. Approximately 45 people were rescued from the Indian Ocean's waters, according to a report from the Maritime and River Port Agency.