The Nyiragongo volcano near the city of Goma in Democratic Republic of Congo erupted on May 22 has left over 20,000 people homeless and 40 are still missing. 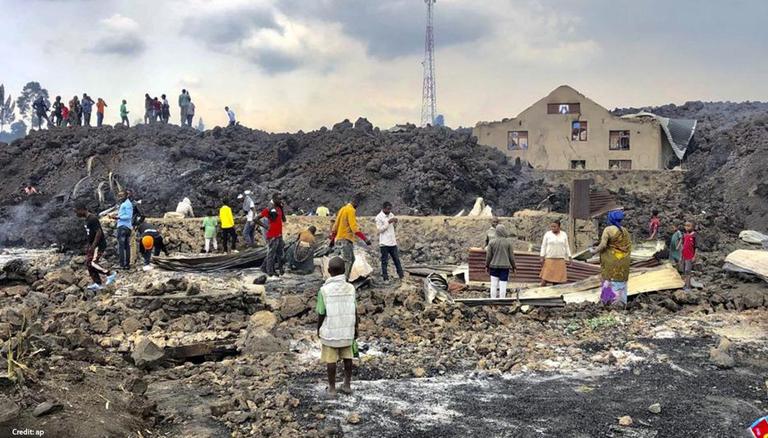 
More than 20,000 people are homeless and 40 are still missing in the volcanic eruption in Congo. The Nyiragongo volcano near the city of Goma in the east of the Democratic Republic of Congo (DRC) erupted on May 22. At least 31 deaths were reported, 24 people were burned by the lava and 40 adults have been reported missing due to the eruption. The people who were evacuated have been taken to Sake and some of them have crossed into Rwanda.

According to the UN Office for Coordination of Humanitarian Affairs (OCHA), more than 4500 households have been made homeless. More than 20,000 people who have been homeless would live in host communities or public places not affected by the disaster, OCHA said citing IOM. People who fled their homes have lost valuable possessions including motorcycles that were either consumed by the lava flow or looted, the OCHA said in a statement on May 26. Although the lava has stopped flowing but the subsequent earth tremors are felt in Congo. More than 200 small and medium earthquakes have since caused cracks in buildings and streets in Goma.

The ash cloud caused by the eruption has closed down airports in Goma and Bukavu and is likely to cause respiratory disease. The Nyiragongo volcano, which looms over Goma town erupted with lava streams pouring down towards Rwanda. Another lava stream headed in the direction of Goma town and stopped 300 meters from Goma International Airport, the OCHA said in a statement. The local residents who were evacuated were taken to Sake and another group of people crossed the border into Rwanda seeking refuge. According to UNICEF, more than 150 children were separated from their families and more than 170 children are feared to be missing as people fled the city of Goma following the eruption of the Nyiragongo volcano.

READ | Congo: People click selfies in front of Mount Nyiragongo as it continues to erupt