Australia, Japan To Sign Defence Accord During Virtual Summit: Report

Australia and Japan are scheduled to host a virtual summit on January 6 to sign a defence accord as both countries aim to strengthen defence cooperation. 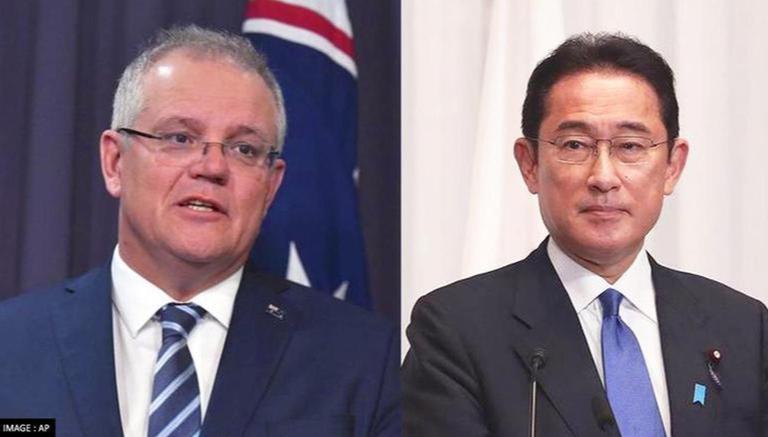 
Australia and Japan are scheduled to host a virtual summit on January 6 to sign a defence accord as both countries aim to strengthen defence cooperation in the face of China's growing military power. According to Kyodo News, the Reciprocal Access Agreement will improve interoperability and collaboration between the Japanese Self-Defense Forces and the Australian Defense Force, including easing restrictions on the transportation of weapons and supplies for joint training and disaster relief operations.

The deal will be signed in a virtual summit between Australia's Prime Minister Scott Morrison and Japan's Fumio Kishida. Morrison called the current deal with Japan "historic" in a statement on Wednesday, saying it would, for the first time, offer a clear foundation for improved interoperability and cooperation between our two armies.

Treaty will be statement of two nations' commitment to work together: Morrison

According to AP, Australian Prime Minister Scott Morrison stated, "This treaty will be a statement of our two nations' commitment to work together in meeting the shared strategic security challenges we face and to contribute to a secure and stable Indo-Pacific,"

After the United States, Australia will be the first country to reach a deal with Japan. The United States, Australia, India, and Japan are all participants of the "Quad" strategic discussion, and Morrison indicated Wednesday that Australia would contribute an increasing agenda to it as well. Australia signed the Aukus trilateral security pact with the US and the UK in September, under which the two countries agreed to assist Australia in acquiring nuclear-powered submarines. Whereas, according to China, Aukus "seriously undermined regional peace and stability, intensified the arms race and undermined international non-proliferation efforts."

According to Japanese media, Prime Minister Fumio Kishida had planned to visit Australia in January to sign the agreement, but on Tuesday he said that he will forego the in-person summit in order to focus on Japan's COVID-19 response. This happened amid a deterioration in Canberra-Beijing relations.

Their ties have deteriorated since Beijing was enraged by Canberra's demand for an independent study into the origins of the new coronavirus. When Australia barred Chinese tech giant Huawei Technologies from building its 5G network in 2018, relations between the two countries deteriorated. For some months, Canberra has been embroiled in a trade battle with Beijing, which has imposed restrictions on a number of Australian products.