Each year, the entire crab colony which estimates at 50 million, in the little northwestern island of Australia migrate across the island 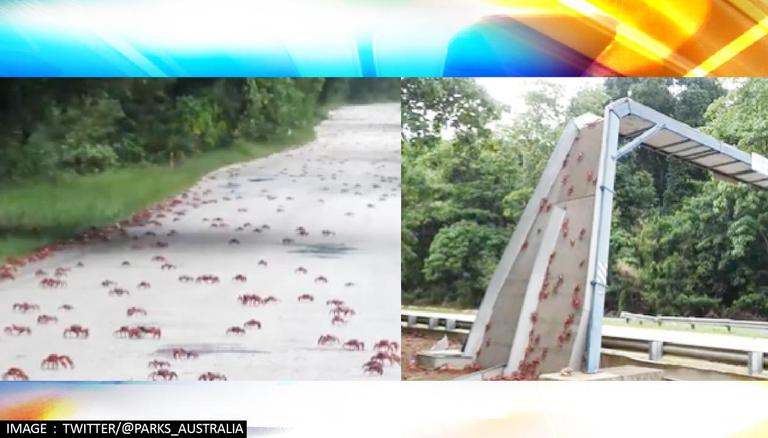 
As part of an annual migratory journey towards the ocean, millions of red crabs swarmed on roads as well as bridges on Christmas Island of Australia further closing down certain roadways. Each year, the entire crab colony of the little island in northwestern Australia, which is believed to be over 50 million in population, migrates across the island, as per an Independent report.

The occurrence on the island commences with the first showers of the season, which normally begin during October or November but can even occur as late as January. The movement of these carnivorous crabs is also linked to the lunar calendar. During this time, these tiny creatures start marching to the ocean near the national park to mate and reproduce. This movement is recognised as one of the world's biggest migrations, as per the Independent.

Apart from moving across the roads and bridges, on their long trip, the crabs even travel through residential neighbourhoods. Residents become extra careful and they typically move out from their way to make space for their journey.  USA Today stated that accommunity has even constructed a bridge to assist the crawling crabs in crossing a busy road.

Furthermore, in photographs and videos posted by Parks Australia, the organisation that oversees the nation's six national parks and other marine and botanical gardens, it can be seen that millions of crabs are moving on the road, climbing bridges and even seen at the entrance of an office door. Authorities of the Australia parks have spent weeks planning for this influx, blocking roads and asking tourists to park their cars safely.

The #crabcollab that 2021 has been waiting for: Christmas Island red crabs x Crab Rave 🎉.

Migration season means crabs are raving all over the island 🏝️, from the heaving #crabbridge 🦀🌉 to the roads.

With red crab migration in full swing on Christmas Island 🏝️, the crabs are turning up everywhere, including at the door of an office block 😮!

Our staff have been out managing traffic 🚦, raking crabs off roads 🛣️ and providing updates to the community on road closures 🚧. pic.twitter.com/nuYQmNcRST

As their migratory process, male crabs are the first to arrive at the ocean's edge, which is then accompanied by female crabs, who would prepare to lay up a hundred and thousands of eggs during the breeding season. Following that they would live in burrows for two weeks to develop the eggs. As per National Geographic, between the final quarter and the new moon, those crabs discharge eggs into the sea during the high tides.

"During this period, sea level on the beaches varies the least and offers an easier approach, a factor so important that if weather delays the migration, crabs will put off spawning until the next lunar month," USA Today reported, citing National Geographic.

Moreover, red crabs are also called robber or coconut crabs. They always reproduce before sunrise in the final quarter of the moon on a retreating high tide. After a month later, newborn red crabs might return to the beach to begin their return trip to Christmas Island's tropical forest.