"We can only assume that things are likely to get worse before they get better given the number of people infected in the community," NSW Premier said. 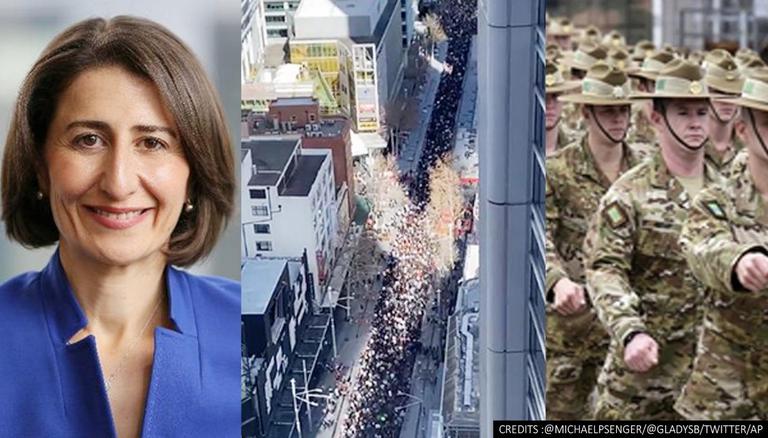 
Amid the dire warnings that the outbreak of the hypervirulent Delta variant is poised to get worse, the government in Australia’s Sydney on Thursday deployed hundreds of military personnel to enforce a COVID lockdown in its second-most populous city. The stay-at-home orders were instated in Sydney in June to curb the rising trajectory of the delta variant transmission. As New South Wales hit a record one-day caseload of novel coronavirus infections, an estimated 239 in a worrying trend, the NSW government scrambled to impose the stricter lockdown, according to the local press reports. At least 300 military personnel along with the Police on July 29 were seen in the broadcasts heckling and pushing the NSW marchers of ‘freedom’ protesting against the COVID-19 norms as they enforced the lockdown.

"We can only assume that things are likely to get worse before they get better given the number of people infected in the community," New South Wales (NSW) Premier Gladys Berejiklian said in a televised address, as she cited the national vaccine shortage and justified the need for the immediate curbs on the non-essential movement as hospital admissions spiked from COVID-19 spiked.

As the deadly surge of the COVID-19 clutched the NSW, government, that has previously ordered the citizens under 60 to be given alternate vaccine Pfizer had now ordered the youth and adults to get an AstraZeneca vaccine instead as the city stockpiled the  3 million supply. NSW Health data shows just 17 per cent of adults aged above 16 as fully vaccinated. Dozens of soldiers in uniform were seen cracking down on the non-compliant residents flouting stay-at-home orders. They hit the streets with the police also knocking door-to-door for those caught flouting.

A military intervention request was formally made by NSW Police Commissioner Mick Fuller to Prime Minister Scott Morrison.  Australian Defence Force will enforce restrictions in Sydney with the police and provide assistance, which had been essential over the past 18 months, NSW Police Commissioner Fuller told state press. “Army’s unique skills and training have combined many times with those of our police officers to serve the people of NSW in times of crisis, such as the floods and severe bushfires we’ve experienced in recent years,” furthermore he said in a televised address.

As of late Thursday evening, thousands of mask-less protesters flooded the streets of Sydney, and other populous cities of Australia, revolting against the latest COVID-19 lockdown. They demanded, "freedom" and "the truth” as they marched from Sydney’s Victoria Park to Town Hall with riot police apprehending them. Footages showed officers detaining several from the crowd in handcuffs.

Big protests in Sydney, Australia after the government put greater Sydney back into a weeks-long Wuhan-style lockdown of all non-essential activities following 1 COVID death and discussed deploying the military to hotspots to keep people from leaving.pic.twitter.com/7cC6gxyq4k