Tasmanian Devils Born On Australian Mainland After 3,000 Years; All You Need To Know

Tasmanian devils have been born on the Australian mainland for the first time in more than 3,000 years after they died out in the country. 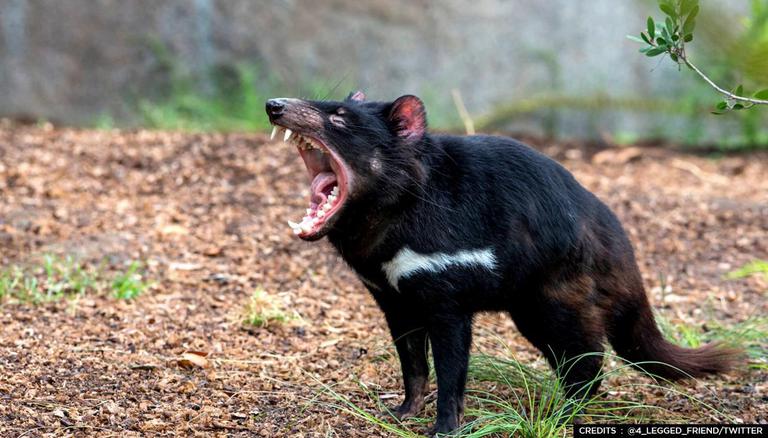 
Tasmanian devils have been born on the Australian mainland for the first time in more than 3,000 years after they died out in the country. In an Instagram post, Australian NGO Aussie Ark informed that seven baby Tasmanian devils were born at the 988-acre Barrington Wildlife Sanctuary in New South Wales. Previously, the NGO had introduced 11 of the creatures back into the wild in mainland Australia, following an earlier trial involving 15 of the marsupials, bringing the total of Tasmanian devils on the mainland to 26. Now, just months after their release, the creatures have successfully reproduced.

In the caption, Aussie Ark said, “The wilds of mainland Australia are experiencing a special kind of baby boom—one that hasn’t happened here in more than 3,000 years. Aussie Ark, in partnership with @rewild and @wild.ark, are celebrating the birth of 7 Tasmanian Devil joeys born into the 400 hectare Barrington Wildlife Sanctuary”.

How did Tasmanian devils vanish?

According to a press release, the NGO said that more than 390 devils have been born and raised at Aussie Ark in a way that fosters natural behaviour in the animals, preparing them for release into the wild. It added that Aussie Arks ‘Rewild Australia’ strategy is a key component, alongside Species and habitat recovery, in returning Australia to its pre-European state. The NGO even went on to say that if all goes as planned, the animals will breed and produce joeys, eventually resulting in a self-sustaining wild population.

The Tasmanian devils vanished from the Australian mainland in a large part because they were outcompeted by the introduced dingoes, which hunt in packs. The creatures survived only on the island of Tasmania, where the Dingoes never reached. Today, just 25,000 devils are left in the wild of Tasmania.

Tim Faulkner, Aussie Ark President, said, “In 100 years, we are going to be looking back at this day as the day that set in motion the ecological restoration of an entire country”.

“Not only is this the reintroduction of one of Australia's beloved animals, but of an animal that will engineer the entire environment around it, restoring and rebalancing our forest ecology after centuries of devastation from introduced foxes and cats and other invasive predators,” he added.

Why are they called 'devils'?

It is worth mentioning that Tasmanian devils are the world’s largest carnivorous marsupials and are native apex predators. This means that their reintroduction will help control populations of feral cats and foxes that hunt other endangered species. The creatures are also scavengers, which helps to keep their environment free from disease.

They are feisty mammals and have a coat of coarse brown or black fur. They look like a baby bear and they have long front legs and shorter rear legs, giving them a lumbering, piglike gait. Early European settlers dubbed them “devils” after they witnessed displays such as teeth-baring, lunging, and an array of spine-chilling guttural growls. Interestingly, these behaviours also inspired the ‘Looney Tunes’ portrayal of Taz, the Tasmanian devil, as a snarling lunatic.

WE RECOMMEND
Australian fires: Over 60,000 koalas and various other species affected, suggests report
US Presidential Elections 2020: Can a voter fix problem on mail-in ballot?
Ark Halloween Skins: Get to know all new skins from 'Fear Evolved' event