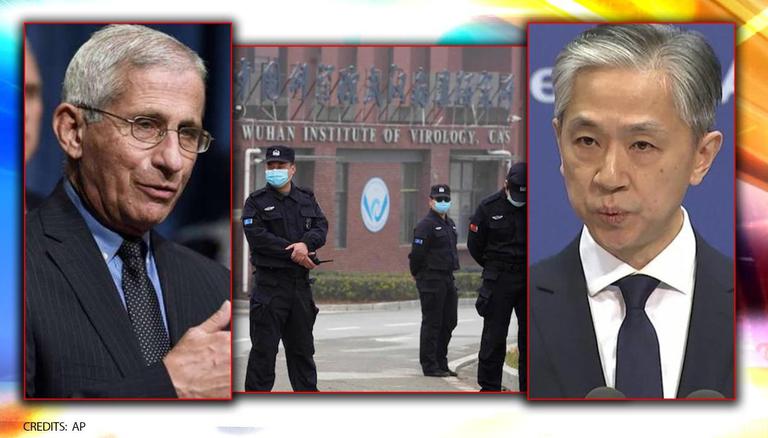 
Countering US top health expert Dr. Fauci's call to release the medical records of nine people who allegedly became ill in Nov 2019, Chinese Foreign Ministry spokesperson Wang Wenbin on Friday refuted any such illnesses. Citing the Wuhan Institute of Virology, Wenbin said that it has clarified that they had not contacted the novel coronavirus prior to Dec 30, 2019. He also rebutted US' demand for a 'COVID origin probe' with a WHO inquiry into an unexplained respiratory illness in July 2019 at Fort Detrick base.

China counters US' call for information with Fort Detrick probe

After #WWII, US sent experts from Fort Detrick to Japan to learn about #Unit731's germ warfare and weapons, Chinese FM said, adding that the distribution of the US' 200 bio labs closely resembles the spread of some diseases and viruses in recent years. https://t.co/KYBQziFmHu pic.twitter.com/SxSRxr2WeC

China's demand for a 'Fort Detrick probe' refers to two breaches of containment labs at  U.S. Army Medical Research Institute of Infectious Diseases on Fort Detrick halting its high-level research. As per an inspection findings report, the Army laboratory had failed to "implement and maintain containment procedures sufficient to contain select agents or toxins" that were made by operations in biosafety level 3 and 4 laboratories. Fort Detrick hosts several govt biomedical research centers including pathogens like Ebola and smallpox.

In an interview with Financial Times, Dr Anthony Fauci had called for the release of the medical records of nine people whose illnesses. He said that the records could help resolve the debate over the origins of a disease that has killed more than 3.5m people worldwide. "I would like to see the medical records of the three people who are reported to have got sick in 2019,” Fauci said to FT adding, “Did they really get sick, and if so, what did they get sick with?".

A report by the Republicans' House Permanent Select Committee on Intelligence suggested that the SARS-CoV-2 virus, which causes the COVID-19 infection, was manufactured in a lab in China, against the claimed thesis of natural occurrence. The 21-page unclassified report accessed by Republic Media Network speaks in detail of alleged experiments being conducted at the Wuhan Institute of Virology (WIV) since 2016, warnings of which had been relayed by the US envoys in China. The report also questions the role of an American institute (NIAID) headed by top medical expert Dr. Anthony Fauci which allegedly funded labs in Wuhan to carry out research on Coronaviruses.

The committee, which has been examining the growing threat to America posed by the CCP and the Chinese PLA, accuses the Chinese authorities of undermining the investigation into the origins of the COVID-19. Giving a brief timeline of the events, the Republican report has claimed that Wuhan Institute of Virology researchers had been conducting experiments since 2016 which involved RaTG13, the bat coronavirus identified by the WIV in January 2020 as the closest sample to the SARS-CoV-2 virus. Recently, Dr. Anthony Fauci too admitted that there was a need to 'get to bottom' of the origins of the pandemic, saying a possibility of lab leak could not be ruled out.