Hong Kong, on Sunday, conducted its first legislative assembly ever since China amended laws to reduce the number of directly elected lawmakers. 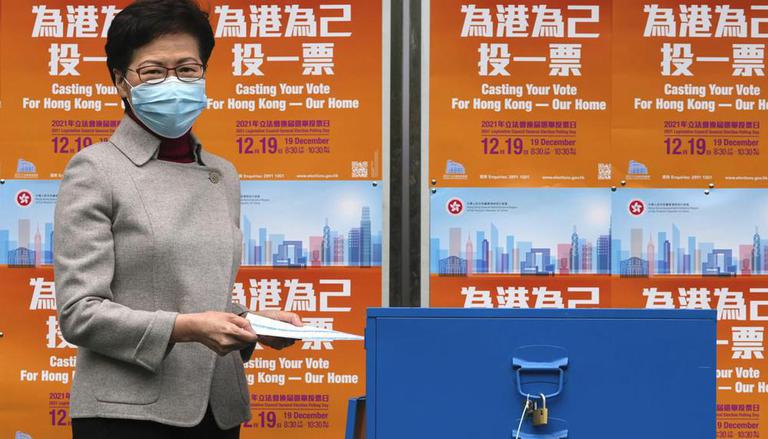 
Hong Kong, on Sunday, conducted its first legislative assembly ever since China amended laws to reduce the number of directly elected lawmakers and vet candidates to ensure that only CCP loyalists could run. Hong Kong is semi-autonomous and is currently governed by Carrie Lam, who was sworn in by Chinese President Xi Jinping in 2017.

Meanwhile, the latest election, which was originally scheduled for September last year but was postponed due to COVID, is expected to witness a voter turnout of more than 4.4 million Hong Kongers.

During her campaign, Lam vowed to “completely solve” Hong Kong's housing issue by building more than 900,000 units in the city's underdeveloped northern outskirts, New York Times reported. Despite the city-state witnessing frequent protests, Lam has maintained that Hong Kong was out of trouble.

To buttress her stance, the 64-year-old has repeatedly appeared at interviews, smiling, and dismissing that the city was being “crushed” by CCP. It is imperative to note that law enforcers in the city have detained more than 10,000 pro-democracy protesters ever since the draconian National Security Law (NSL) conferred upon them the power to do so.

On Saturday, Hong Kong's Constitutional and Mainland Affairs Minister Erick Tsang warned that foreign forces may be attempting to undermine the elections. Meanwhile, amidst constant calls to boycott the elections, the city offered facilities, such as free transport, to lure voters to the polling booth. Regardless, pre-election polls have predicted low voter turnout.

“Casting your vote for HK — our Home! LegCo Election is important to you and HK’s future!” a message sent by the Hong Kong government read.

“I appeal to members of the public to perform their civic duties for the sake of an early resumption of normal activities,” Lam has previously said about the elections. "The whole voting process will be put in a closed loop. Voters who visit these special polling stations cannot leave the area of the polling station, they cannot go into the community,” she added dismissing fears that elections could trigger COVID surge.