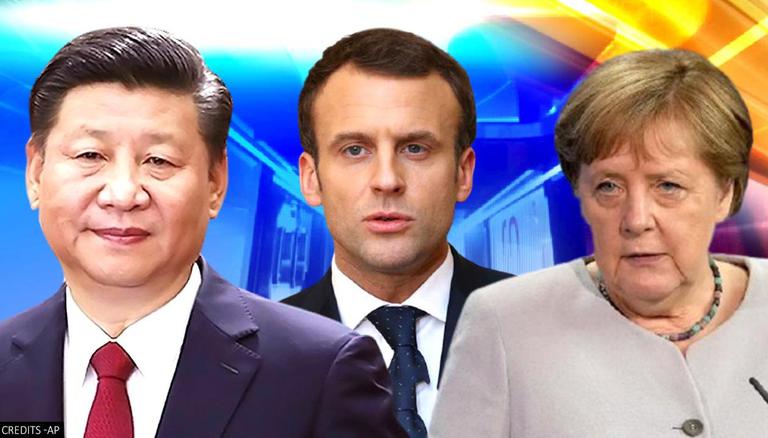 German Chancellor’s office said in a statement, “Chancellor Merkel, President Macron and President Xi exchanged views in particular on the status of relations between the EU and China. They also talked about international trade, climate protection and biodiversity.”

“The Federal Chancellor and President Macron called for further adjustments to short-term CO2 savings targets and for additional joint efforts to protect biodiversity at the 15th Conference of the Parties to the Convention on Biological Diversity in Kunming / China, which is planned for October. The conversation also revolved around working together to fight the Covid-19 pandemic, global vaccine supply, and international and regional issues,” it added.

Macron, Merkel and Xi talked virtually after, in May, the European Parliament paused ratification of a fresh investment agreement with China until Beijing agrees to lift sanctions on EU politicians. The tiff at the time had further enhanced a dispute in Sino-European relations and denying EU companies more access to China. Following the meet of the trio, Macron’s office said in a statement that the French President and German Chancellor discussed with the Chinese President “the concrete steps, in particular the end of funding coal-fired power stations, necessary to achieve the objectives set concerning the evolution of greenhouse gas emissions and the achievement of carbon neutrality.”

The meeting also came in the backdrop of China accusing the EU of imposing “unacceptable” preconditions on a visit to Xinjiang province. As per news agency ANI, the Chinese mission to the EU said, “China has sent an invitation to the UN High Commissioner for Human Rights to visit Xinjiang and the two sides have been in constant communication.” It added, "Beijing has invited diplomats from the EU and its member states posted in China to visit Xinjiang many times. However, the trip has not materialized due to preconditions set by the EU side, which are unacceptable to any sovereign state."