China's homegrown developed Z-10 attack helicopter is equipped with the latest modern technology that has the capability to handle at least six tanks. 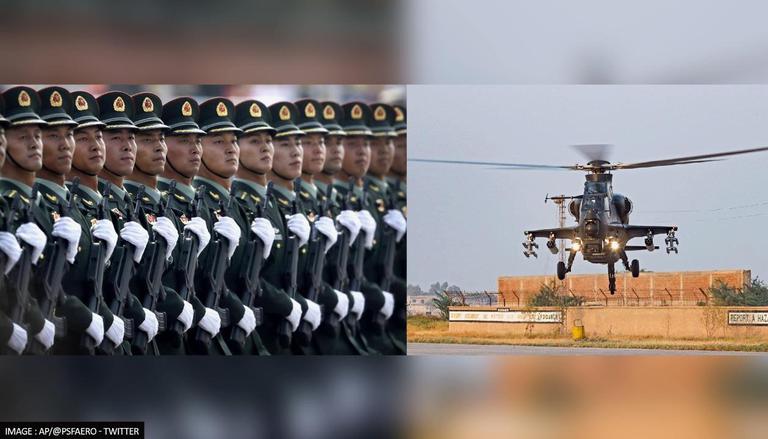 
China's homegrown developed Z-10 attack helicopter is equipped with the latest modern technology that has the capability to handle at least six tanks, infantry and other choppers, PLA revealed on Monday. Citing the reports of China Central Television (CCTV), Global Times, said that the People's Liberation Army (PLA) has commissioned the Z-10 in large numbers in recent years. The report said that the Chinese government has recently inducted an aerial assault brigade affiliated with the 83rd Group Army.
While speaking to CCTV, Zhang Zhengfei, an ace pilot at the brigade, said that the indigenous helicopter has a range of 1,120 km and has four external hardpoints that can carry air-to-ground and air-to-air missiles. Also, the chopper is equipped with rockets and a 23-millimetre calibre revolver gun.

Further, the ace pilot revealed the helicopter can be armed with up to 16 anti-tank missiles, four 7-barrel multiple rocket launchers or two 32-barrel multiple rocket launchers according to the requirements of the mission. The giant flying machine can hit vehicles and tanks with the latest missile technology while rockets and guns can be used against infantry targets, according to the pilot's description provided to the CCTV. "When attacking a hostile tank group, the Z-10 will usually carry eight air-to-ground missiles and two multiple rocket launchers," Zhang told CCTV. Further, he explained that the missile has an accuracy of 85% and each Z-10 sortie can at least destroy six enemy tanks.

"A standard group of four Z-10s can carry 32 anti-tank missiles, eight 57 millimetre calibre multiple rocket launchers and four guns, and this is enough to wipe out three tank companies, CCTV quoted PLA pilot as saying. Moreover, the ace pilot wears a specially designed helmet that has a display and can show all key parameters and battlefield dynamics directly onto the visor. The pilot can even use the helmet to aim, as the weapons will point to wherever the pilot is looking through the helmet, according to the CCTV report. The pilot also revealed that the highly advanced helicopter was also used when performing exercises near the island of Taiwan in October this year.

WE RECOMMEND
China’s disappeared: List of high-profile figures who have gone missing in past decade
Chinese Foreign Ministry claims situation at India-China border 'generally stable'
China warns US against developing military ties with Taiwan in order to maintain peace
US 'more aligned’ with allies on China and Russia's aggression towards Ukraine: Blinken
China must share more data on COVID virus origin 'for a better future', reiterates WHO