Chinese media criticised the US senator for Arkansas Tom Cotton after he called for a boycott of the 2022 Winter Olympics that is due to be held in Beijing. 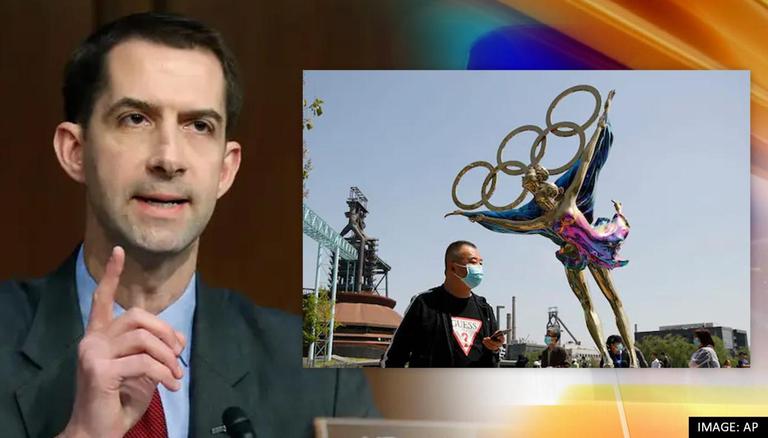 
United States Senator Tom Cotton called for a boycott of the 2022 Winter Olympics, citing the safety and security of the athletes. Cotton also criticised China for its “crimes against the world and urged the Biden administration to not participate in the “genocide Olympics.” In response to the American lawmaker’s remark, the Chinese media lashed out at Tom Cotton.

Hu Xijin, editor-in-chief of the Global Times took to Twitter to criticise the US Senator, calling him "political rubbish". Furthermore, he expressed hope that other senators in the United States Congress were not like him. Lashing out at Tom Cotton, Hu Xijin in the tweet said that the United States senator for Arkansas “lies” and “lacks the least self-awareness.” His tweet came in response to the video of Tom Cotton in which he called for a boycott of the Winter Olympics which is due to be held in China.

In the video, Tom cotton said that he “regrets” that the decision of boycotting the Olympics would prevent the athletes from participating in the competition. He, however, added that the Biden administration failed to develop a plan with other allies to hold the Winter Olympics in another country. The statement of US Senator Tom Cotton came as the US President Joe Biden on Thursday, 18 November, said that he is “considering” a diplomatic boycott of the 2022 Winter Olympics games which is due to be held in Beijing.

The United States must implement a complete and total boycott of the Beijing Winter Olympics.

The threat to our athletes and China’s crimes against humanity leave us no other option. pic.twitter.com/lSLvKhJPMd

Speaking to reporters ahead of talks with Canada Prime Minister Justin Trudeau, Biden backed the boycott of the Olympics in February, saying that it is “something we’re considering”. Meanwhile, the White House Press Secretary Jen Psaki on Friday, November 19 in a press briefing said that the US is still finalising "what our presence will be" at the games, which are due to begin on February 4. Responding to a question about the timeline regarding the decision concerning diplomatic boycott, Psaki said that she "can't give" a prediction of the timeline as she wants to give space to the national security team and the President to make the decision over the matter.

WE RECOMMEND
What drives high-profile disappearances in China?
US ties with S Korea, others irking China: WH official confirms Xi made it clear to Biden
US, Canada agree to launch 'strategic dialogue' to align approach on China & Indo-Pacific
China threatens Lithuania over Taiwan office opening, says it will 'reap what it sows'
China slams US for 'politicising Beijing Olympics'; says it could harm athletes' interests