'Graveyard Of Empires': China Mocks US Over Video Of Taliban Using Military Plane As Swing

Chinese official Lijian Zhao alleged that the war chest that the US had left behind was being used by the Taliban as 'swings and toys'. 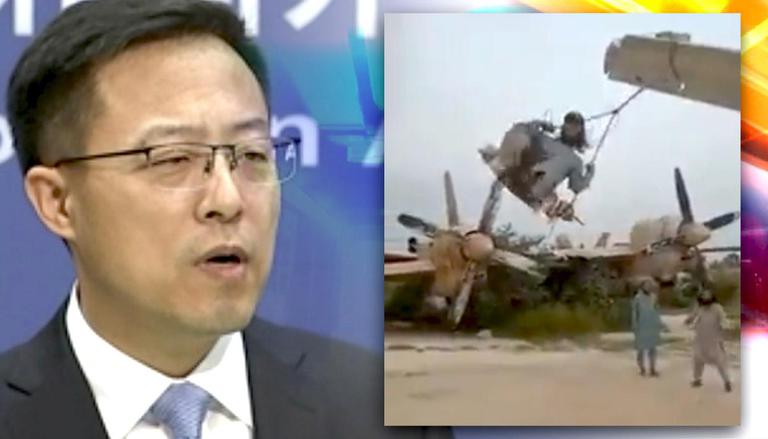 
China's Foreign Ministry Spokersoersn Lijian Zhao mocked the United States over its chaotic withdrawal from Afghanistan sharing a video where the Taliban is allegedly using a US military plane as a swing. Taking to Twitter, the Chinese official cited the unverified video calling the state of affairs a 'graveyard of memories and their war machines.' Lijian Zhao alleged that the war chest that the US had left behind was being used by the Taliban as 'swings and toys'.

In the video, a Taliban fighter can be seen swinging from a military aeroplane. The terror group's fighters reportedly tied a rope around the wing of the plane to use it as a swing. One Taliban fighter was seen enjoying the joyride, while another was seen pushing him. A few other Talibanis were also spotted hanging around the US military plane.

The graveyard of EMPIRES and their WAR MACHINES. Talibans have turned their planes into swings and toys..... pic.twitter.com/GMwlZKeJT2

Even as China hits out at the US over its pullout from Afghanistan, the country has been extending both diplomatic and financial support to the Taliban-run Afghanistan. After backing the Afghan terrorist group's interim government, China became one of the first nations to attend a meeting of Foreign Ministers on Afghanistan. It is important to mention that the meeting was convened by Pakistan for 'neighbouring countries' and was attended by Foreign Ministers from Iran, Tajikistan, Turkmenistan and Uzbekistan.

Thereafter, it announced $31 million as aid to Afghanistan saying it is a necessary step to restore order and end the anarchy. Additionally, Foreign Minister Wang Yi said China will provide Afghanistan with grains, winter supplies, vaccines and medicines, state-run Xinhua news agency reported. Chinese Foreign Ministry spokesman Wang Wenbin stated that the formation of the new Taliban government had 'put an end' to the anarchy in Afghanistan that lasted for over three weeks.

Even before the fall of Kabul, China's Foreign Minister had met a nine-member Taliban delegation including co-founder and deputy leader Mullah Abdul Ghani Baradar. Here, he had called the Taliban an 'important political force' in Afghanistan.

The interim government announced by the Taliban has inducted several hardline Taliban commanders and members of the US-designated terrorist group-- Haqqani Network as key leaders of the administration.