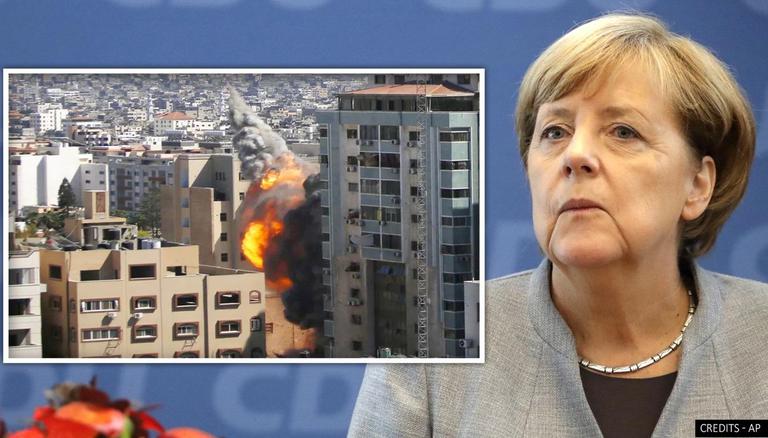 
While speaking at a forum on Europe, German Chancellor Angela Merkel said that “indirect talks” with Islamist group Hamas were essential to advancing efforts towards a Middle East ceasefire. Merkel said that “of course there must be indirect talks with Hamas” and noted that Egypt and other Arab countries were already trying to mediate between Israel and Gaza Strip’s Islamist rule. She also added that without Hamas there will be no ceasefire.

Merkel’s comments came while German Foreign Minister Heiko Maas began a one-day diplomatic mission to the region. According to AP, Maas on May 20 said that he wanted to make clear that Germany believes that Israel has the “right to defend itself” against such “unacceptable attacks”. He arrived in Tel Aviv and met with his Israeli counterpart Gabi Ashkenazi and reaffirmed Germany’s commitment to making its contribution to help Israel defend itself.

As per AP, Maas said that he was concerned about the rising number of civilian victims and added that he supported international efforts for a ceasefire. He said that he had been in contact with his colleagues in Israel, Egypt, Qatar, Jordan and the US to this effect. When asked whether he thought Israel’s military counterstrikes were appropriate, Maas stated that the “self-defence” measures need to ensure that infrastructure which was used to carry out attacks poses no future threat.

Meanwhile, as heavy fighting continues between Israeli forces and Palestinian militants in Gaza Strip, Israeli Prime Minister Benjamin Netanyahu said that he is “determined to continue this operation until its aim is met”. Netanyahu said that Israel would push ahead to return calm and security to its citizens. Egyptian negotiators, on the other hand, have been working to halt the fighting and an Egyptian diplomat said top officials were waiting for Israel’s response to a ceasefire offer.

The deadly conflict between Israel and Hamas has entered the second-week leaving trails of destruction behind as civilians wait for the violence to stop. Israel unleashed artillery fire and airstrikes in an attempt to clear out a network of militant tunnels. Hamas and other militant groups embedded in residential areas have fired some 4,000 rockets at Israeli cities. According to the Gaza Health Ministry, at least 227 Palestinians have been killed, including 64 children and 38 women, with 1,620 people wounded. Hamas and Islamic Jihad say at least 20 of their fighters have been killed, while Israel says the number is at least 130.

WE RECOMMEND
Hamas is looking for a ‘major success’ before conflict ends: Israel Defense Forces
Netanyahu says 'only two ways' to handle Hamas, 'either conquer them, or deter them'
Israel's IDF: Hamas fired 3300 rockets out of 12000; our focus is its underground infra
'Hamas fired 3700 rockets, using civilians as human shield': Israel's Consulate General
Israel-Hamas conflict: Amid bid to stoke passions in India, what they're not telling you