US President Joe Biden and his French counterpart Emmanuel Macron got on the phone on Wednesday to sort out the differences amid the AUKUS row. 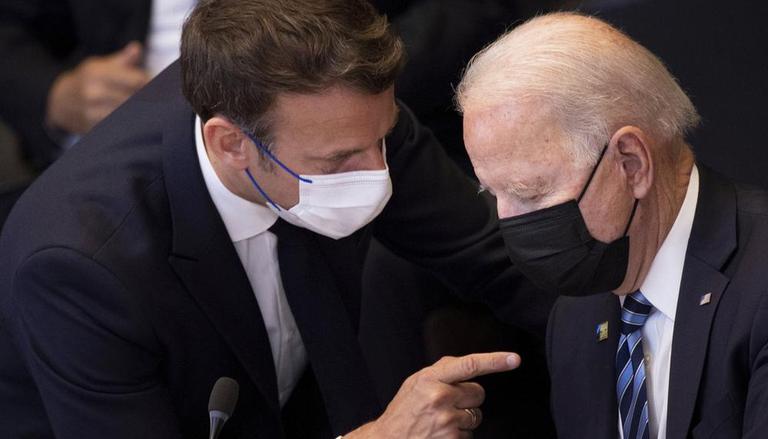 
Days after Australia cancelled a significant multi-billion defence deal with France, US President Joe Biden and his French counterpart Emmanuel Macron got on the phone on Wednesday to sort out the differences and to repair ties between the two nations. According to the White House, the call between the two leaders continued for nearly half an hour in which Biden agreed to meet Macron next month to discuss the way forward. After making the telephone calls, the two countries issued a statement confirming that both the leaders have decided to open a process of in-depth consultations, aimed at creating the conditions for ensuring confidentiality.

It is worth noting that the phone call between the two presidents came after Britain, Australia and the US announced a defence partnership called AUKUS, with the initial task of the United States and the UK backing Canberra's bid to acquire nuclear-propelled submarines. This significant development paved the path to the cancellation of the previous agreement signed between Australia and France-based defence companies. Following these developments, irated France recalled its ambassadors from Canberra and Washington as the multibillion-dollar deal to build French submarines was dropped by the Australian side.

The joint statement said the French ambassador will "have intensive work with senior US officials upon his return to the United States." According to the reports, the Biden office contacted the French President to make a call in order to discuss the ongoing tussle between the four countries. Further, the report said that the office of the French President made it clear that Macron was expecting not only clarifications regarding the deal but also clear commitments from Biden. According to the statement, both the leaders agreed that the situation would have benefitted from open consultations among allies on matters of strategic interest to France and our European partners. "It’s not exclusive. It’s not trying to shoulder anybody out. It’s not adversarial towards China, for instance," said Biden during the phone call.

READ | Joe Biden meets Morrison amid AUKUS row, says US has ‘no closer ally than Australia’

Australia and France's take over the deal cancellation

Australian Prime Minister Scott Morrison on Sunday announced that the contract was "not in favour of Canberra." Morrison reiterated that the French government and the Submarine company would have known about it before the deal was called off last week. Earlier, French PM Macron accused Canberra of dropping the French submarine contract in order to favour American nuclear-powered vessels. However, Morrison refuted the French President's allegations and claimed that he had raised issues with the French submarine deal several months ago.

It is worth noting that France had signed a contract in 2016 for a dozen conventional diesel-electric submarines and the work to make them was already underway. The deal was worth at least $66 billion. Meanwhile, explaining the other aspects of cancelling the deal, Australia's Defence Minister Peter Dutton asserted that the United States-manufactured nuclear-powered vessels did not require charging, while French ones did, making Australia choose the American submarines.