Portugal on February 12 started administering COVID-19 vaccines among more than 40,000 police forces under its national vaccination plan that it rolled out last month. Health authorities also vaccinated at least 15,000 Portuguese firefighters, following inoculation of the nursing homes elderly residents and the long-term care units in what Portugal prime minister António Costa called the country’s “most demanding phase so far”. Health Minister Marta Temido during a COVID-19 press briefing said that earlier, that Portuguese will vaccinate the “essential services, beginning: pre-hospital emergency professionals, firefighters, frontline workers, security forces and, among them, members of ‘sovereign bodies’, government and court officials.” In the first of week of February, the country started vaccination for people aged over 50 and other high-risk groups with comorbidities, such as heart disease, heart failure, kidney failure or chronic obstructive pulmonary disease, according to local media reports. 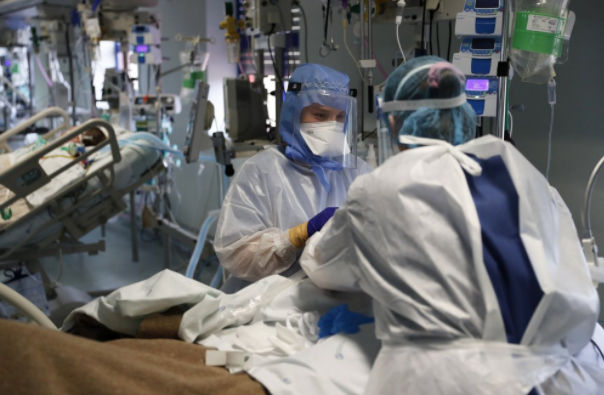 [Nurses tend to a patient in a COVID-19 Intensive Care Unit at the Curry Cabral hospital in Lisbon, Portugal. Credit: AP]

In January, Portugal struck an agreement to procure additional 99,450 doses of the Pfizer COVID-19 vaccine as it had administered a total of 411,600 doses by December 2020. The European nation aimed to inoculate close to 1 million people between January and April. In a statement, the government of Portugal announced that it had close to 400,000 people on its high priority group who were vulnerable to severe COVID-19 infection. Additionally, the vaccination plan constituted nearly 300,000 frontline medics and emergency responders, including security forces, and as many as 250,000 nursing home staff. In a statement to Portugal resident, Prime Minister Costa said that after the inoculation of the essential front-line workers has been tackled, the country will move on to vaccinate the rest of its population. It will be “the challenge of all challenges”, he said, adding that the effort will require “great capacity for mobilization of all health units”.

7 million to be inoculated by September

At least 0.69 percent of the total population have already been jabbed with two-shots of the Pfizer vaccine, while as many as 2.66 percent have been administered one shot. The country is now drafting a plan forward to inoculate 69.31 percent of the population to achieve herd immunity from the vaccination. Costa, furthermore, cited EU’s vaccination procurement efforts, saying that the bloc has been vying for vaccine firms to comply with contracts and ramp up capacity for production to accelerate the process of vaccination. However, he concluded, that despite vaccination, the population is required to continue taking health safety measures as the vaccination for the rest of the population was a  “long process”. Portugal aims to vaccinate around 7 million people by the end of September.

WE RECOMMEND
How are experts tracking variants of the coronavirus?
Canada detects first case of Brazilian coronavirus variant in Toronto; man hospitalised
Study sheds light on how coronavirus may hijack human cells
UK could be 'more or less free' of worst coronavirus effects by December, says expert
Malaysia to offer free coronavirus vaccinations to millions of foreign workers: Minister