Effects Of Spain's La Palma Volcano Could Last Up To 84 Days, Dangers Lie Ahead: Experts

The volcano on La Palma, one of eight volcanic islands in the Canary Islands in Spain erupted on Sunday, September 19, causing lava streaming towards houses. 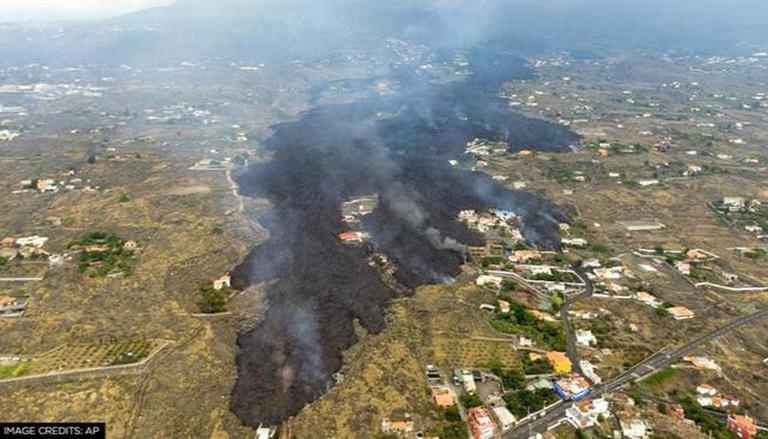 
The volcano on La Palma, one of eight volcanic islands in the Canary Islands in Spain erupted on Sunday, September 19, causing lava streaming towards houses. The eruption of the volcano forced the evacuation of thousands of residents, according to AP.  The authorities have warned about more dangers that lie ahead for residents.

The lava flow has been increasing and reportedly new vents might open up. The authorities have started the evacuation of residents of La Laguna town, reported Volcano discovery. The eruption continues with lava fountains and continuing lava flow emission. According to The Associated Press, the Volcanology Institute has said that the volcano has been releasing 8,000 to 10,500 tons of sulphur dioxide every day. As per the Volcanology institute, sulphur dioxide causes irritation to the skin, eyes, nose and throat and can cause acid rain and air pollution. The eruption has also produced volcanic ash, which can cause respiratory problems.

Authorities in La Palma have advised people to stay indoors with their windows and doors closed in the region where the ash was falling, according to AP. The authorities have so far evacuated over 5,500 people. Spanish Prime Minister Pedro Sanchez visited the affected area on Monday after delaying his visit to the United States to attend the United Nations General Assembly.

The effects of the volcanic eruption could last for up to 84 days, experts stated, while adding that dangers still lie ahead for residents, including earthquakes, acid rain, lava flows, toxic gases, and volcanic ash, reported CBS news. The experts from The Canary Island Volcanology Institute have made the calculations based on the length of previously occurred volcanic eruptions in Spain’s Canary Islands archipelago.

Here are the videos that have surfaced on social media which show the terrifying visuals of the volcanic eruption:

Please pray for our church in La Palma, Canary Islands Spain. The volcano eruption is close to the church, but so far everyone is fine. Some friends & family connected to the church have been affected, but our members and Pastors are ok. #RevivalinSpain pic.twitter.com/d3CFGpZQGb

Rivers of lava oozed down streets in La Palma, one of Spain’s Canary Islands, after a volcano eruption on Saturday (19/09/2021) pic.twitter.com/YI09XaonlP

When a volcano erupts in your backyard…

🔥 lava river of the volcano of the island of La Palma in the Canary Islands. Impressive images🔥 @lpalma #lapalma pic.twitter.com/o3wNBAtpCM

🔥 eruption of the volcano on the island of La Palma in the Canary Islands very close to a group of houses 🔥 @lapalma #lapalma pic.twitter.com/cIrwNcyqNi

A volcano erupted on Sunday, September 19, on Spain’s Atlantic Ocean island of La Palma. It was the second volcanic eruption in 50 years for the island, which has a population of 85,000, according to AP.  An earthquake of 4.2-magnitude was reported before the eruption. Scientists monitoring the build-up of underground magma in La Palma detected more than 20,000 earthquakes. They are known as "earthquake swarm," which indicate an approaching eruption. The volcano, as per the authorities, erupted after a series of constant small tremors, which started on September 11, in Cumbre Vieja national park in the south of the island.

READ | Many people moved to safety due to Spain wildfire