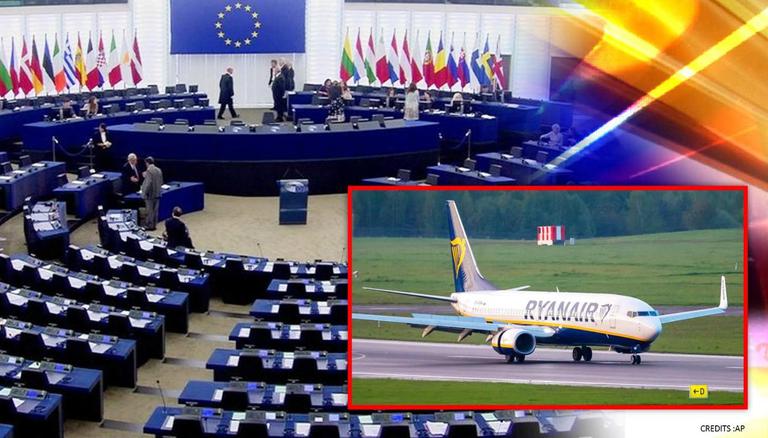 
Following Ryanair flight diversion, the European Union (EU) member states on May 24 agreed to cut the bloc’s air links with Belarus. In a special EU summit, the 27-member bloc strongly condemned the “outrageous actions” which endangered aviation safety and called on the International Civil Aviation Organization (ICAO) to urgently investigate the “unprecedented and unacceptable incident”. While taking to Twitter, EU President Ursula von der Leyen also said that in addition to closing the airspace, economic sanctions will also be presented soon.

#EUCO leaders acted forcefully in response to the outrageous actions of the Belarus regime.

We are closing our airspace to planes from Belarus & call on EU airlines not to fly over the country.

The EU leaders urged the European Council to adopt the necessary measures to ban the overflight of EU airspace by Belarusian flights and they called on all EU-based carriers to avoid overflight of Belarus. The ICAO, on the other hand, earlier said that it was “strongly concerned” by the forced landing of Ryanair flight FR4978 in Belarus. The UN aviation agency said that it is now looking forward to more information and confirmation by the countries concerned.

The International Air Transport Association also “strongly” condemned the incident and called for a full investigation by authorities. It is worth mentioning that the flight was en route from Athens to Vilnius when it turned east to Minsk shortly before it reached the Lithuanian border. According to the Flighttrader24 website, the flight path suggested that the plane was actually nearer to Vilnius than Minsk when it turned. The plane from Greece to Lithuania was diverted to Belarus for several hours. Arriving passengers said that they had been given no information about the reason for the abrupt diversion to Minsk.

The incident led to global condemnation. US President Joe Biden said that Belarus's forced diversion of a commercial Ryanair flight and subsequent removal and arrest of Raman Protasevich, a Belarusian journalist travelling abroad are a direct affront to international norms. He welcomed the EU’s call for sanctions against Belarus and instructed his administration to curate options to hold Minsk responsible.

A Ryanair flight en route from Athens to Vilnius (Lithuania) was forced to make an emergency landing in Minsk, Belarus. According to the Russian news agency, Roman Protasevich, the operator of a Telegram channel that Minsk has designated as extremist, was detained during the stopover at the airport. It was carrying 171 passengers and was abruptly rerouted to the Belarusian capital shortly before it was about to exit the country’s airspace.

However, then Belarusian air traffic controllers notified its pilots of “a potential security threat onboard” and directed the plane to divert to Minsk, the Ireland-based airline said in a statement. Belarusian officials said a MiG-29 fighter jet had been scrambled to escort the airliner to Minsk following a bomb scare, which they later conceded was “false”. Six people who boarded the flight in Athens were not on the plane when it arrived in Vilnius including Protasevich and his girlfriend, Russian citizen Sofia Sapega. Both Protasevich and Sapega were detained