“Now we know that you're not fully protected with 2 shots and that there is need for a third vaccination, virologists told politician in Aug," a medic said. 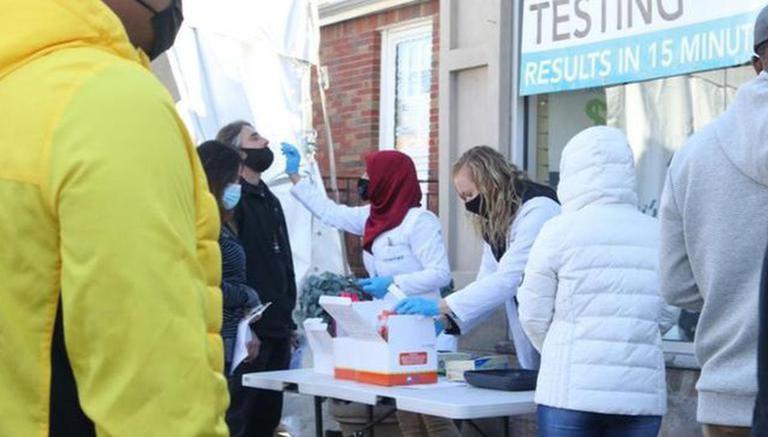 
Europe's much-feared fourth COVID-19 wave has swept in with full force and there has been a drastic spike in the infections ahead of the Christmas festivities. The upsurge has hit Germany with mounting caseload in regions of Saxony, and Cologne on the far other side of the European nation, Sky News reported. German hospital’s intensive care units might fill up as it hit a new record on Thursday with 65,000 new cases. The country might witness two or three times as many cases as it did during the initial days of the pandemic despite that many countries in Europe instated a strict partial lockdown for the unvaccinated population to suppress the uncontrollable trajectory.

"I'm extremely worried," a medic Fabian Dussem told Sky News. He went on to add, "We had three waves before where we had a lot of COVID patients to treat and a lot of them died and now we are running straight ahead to the fourth wave.” Furthermore, he warned that the incidents of severe to mild COVID-19 infections were “rising high and we are extremely worried about what will happen next.”

"I'm annoyed, I'm angry and I'm very tired of this situation because we are still exhausted from the past waves. We don't want to see this anymore,” the medic told Sky News in his remarks expressing worry.

Nearly two-thirds of Germany’s population is fully jabbed against the novel coronavirus. The country’s vaccination campaign turned sluggish ahead of the dastardly fourth wave, but the vaccinations are once again picking up. "In Cologne, during the peak time in summer, we had around 7,500 vaccinations per day, but the vaccination center closed by the end of September,” another medic Dr. Daniel Poerschke at one of the city's main vaccination centers told the outlet. He then added that Germans were now visiting again in large numbers to get their shot. Many Germans believed that the pandemic was over, he noted.

“Now we know that you're not fully protected with two vaccinations and that there is the need for a third vaccination. We should've done this earlier already. We knew that. The virologists told the politicians so, in August already,” Sky News quoted the medic as saying.

In a bid to tackle the fourth wave, across Europe several countries are now resorting to locking down the cities. The Austrian government instated a nationwide lockdown for approximately two million unvaccinated citizens to curb the infections. Unvaccinated individuals aged 12 and above were strictly prohibited from leaving their houses except for essential activities like working, food shopping, taking a stroll, or getting the COVID-19 vaccine. Police officers organised the patrols to monitor those flouting the rule, and to check the COVID vaccination status. A penalty of 1,450 euros was slapped on those in breach of the regulation that was widely criticised by the European citizens who argued that the partial lockdown infringed their civilian liberties.

Germany pushes for new COVID measures ahead of Christmas

Following the warnings from the head of the country's disease control agency that the country could face a 'really terrible Christmas,' Germany earlier yesterday introduced new mandates. Workers were now required to show a proof of vaccination or a negative COVID-19 diagnosis. The restriction was also implemented on public transportation. Governor Michael Kretschmer said the state administration would decide on a hard and clear wave breaker for two to three weeks, according to Associated Press. Outgoing chancellor of Germany Angela Merkel has characterised the rising coronavirus condition in her nation as "dramatic."