The damage to houses and businesses in Spain's northeast town of Alcanar was assessed on Thursday as a result of floods caused by heavy rain. 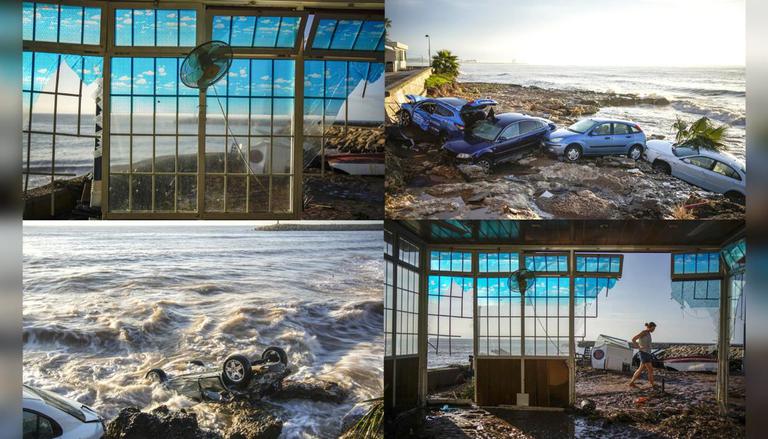 
The damage to houses and businesses in Spain's northeast town of Alcanar was assessed on Thursday as a result of floods caused by heavy rainfall across the nation. When almost 250 litres per square metre of water flooded through the town between midnight and 6 pm on Wednesday, residents felt they were fortunate that no lives were lost. Rosa Mara Sancho, owner of a café on the Alcanar seafront, stated, "We had to get upstairs to our apartment and then leave it all in God’s hands."

The sudden flooding turned roadways into fast-moving torrents that swept away everything in their path. Several cars were dragged away, and about a dozen were thrown into the Mediterranean Sea. Mud, water, and debris have flooded homes and businesses. Carla Bayerri, Sancho's daughter, said they stood helpless as part of the terrace went into the water.

On Wednesday, portions of Spain's central and northern regions, including Madrid were flooded. Three people were in danger, and had to be rescued by firefighters using a helicopter. More people had to be rescued from cars stranded amid the rising waters. 58 individuals were placed in hotels, while another 16 slept on cots in a sports pavilion. At a nearby camping area that was also extensively destroyed, four people had to be evacuated.

READ | Spain: 2 hospitalized when ferry runs into islet near Ibiza

Paquita Aubalat was relieved to learn that her 93-year-old father Vicent had been rescued from his Alcanar home by a neighbour when it was flooded. Authorities were attempting to reopen roads and railroad lines that had been closed due to mud and floods. For the second day in a row, large regions of northern Spain and the Balearic Islands are on high alert for storms.

Emergency services in Madrid dealt with 237 storm-related incidents, while firefighters responded to 50 calls involving flooded homes and water on the highways, according to El Pais. Rain also disrupted trains and metro services. According to State Meteorological Agency's spokesperson, since 1920, August 31 has been the second rainiest day in Madrid, trailing only another August day in 1947.