France: Macron Says 'thank You' As Anti-vaxxer Greets Him With Derogatory Message On Hands

The infuriated French leader Macron had warned people in France who have chosen not to get vaccinated that he would annoy them by limiting public access. 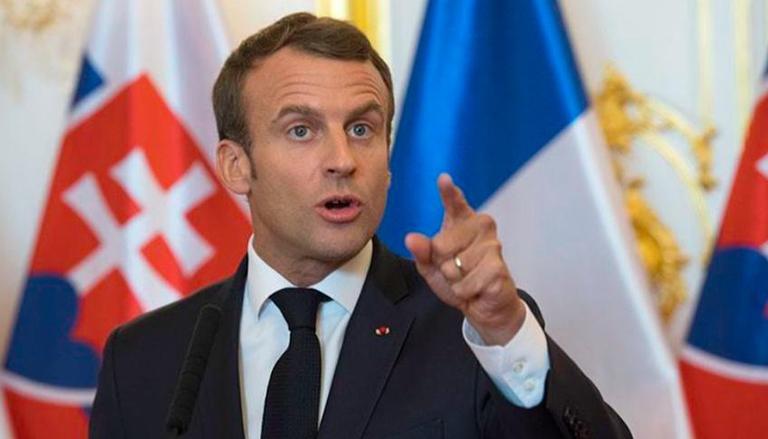 
French President Emmanuel Macron on Tuesday, January 11 was unpleasantly greeted in the southeastern French commune of Tende after a seemingly angry woman about his stringent COVID-19 policies flashed the derogatory words “F**k You” scribbled on her palms. The French leader, though, appeared to be undeterred by her welcome as he continued to say ‘thank you' to the crowd. “Thank you very much, thank you, that’s nice, thank you and good luck, protect yourself,” Macron was heard saying as the woman greeted him with the cuss words. The incident was recorded live by the French TV stations and aired early Tuesday.

According to France’s BFMTV, the said woman was identified later and she told the network that the act was in defiance to the French president COVID-19 strategy, and his recent usage of the derogatory terms where he said that he wants to “pi**off” those who who were reluctant to take the COVID-19 vaccine. The Polish woman, who goes by the name Justyna, further revealed to the network that she had been residing in the country for almost 13 years. The woman appeared to be an anti-vaxxer, as she insisted that the French President  “shouldn’t force us to be vaccinated,” noting the individual rights.

The French President Emmanuel Macron had earlier invited controversy after he said in an interview with France’s Le Parisien newspaper that part of his coronavirus strategy was to “pi** off" the unvaccinated population. "The unvaccinated, I really want to pi** them off. And so we're going to continue doing so until the end. That's the strategy,” he had said, using the French word  “emmerder" that translates to a cuss, implying to bother or cause trouble to someone.

The infuriated French leader warned people in France who have chosen not to get vaccinated that he would annoy them by limiting their access to public venues, bars, restaurants, and every place outdoor and will hamper key aspects of their social lives. He openly challenged the non-vaccinated citizens as he stressed that the limitations in France would mean a curb on possible access to activities in social life, particularly for the non-jabbed citizens.

French Parliament last week approved President Emmanuel Macron’s vaccine pass bill, which would now require all the citizens above 16 years of age to be fully vaccinated or boosted to access public venues including restaurants, cinemas, and transportation, as opposed to showing an RT PCR test. Before the new health pass, France used ‘passe sanitaire’ (health pass), which required either the fully vaccinated status, or recovery from a previous COVID-19 infection, or a negative test for all those above the age of 12 to access public venues.

The bill was introduced to suppress the fats spreading cases driven by the Omicron variant. More than105,200 citizens took to the streets to protest against the new pass across several cities in France on Saturday, according to the Interior Ministry’s statement. Some of the far-right politicians stood in support of the demonstrators including Marine Le Pen's niece Marion Maréchal, conservative Jean-Frédéric Poisson, a supporter of Eric Zemmour, and former Donald Trump advisor Steve Bannon.