"It [UK PM's letter] basically proposes a ‘relocation’ agreement, which is clearly not what’s needed to solve this [English Channel] problem," France asserted. 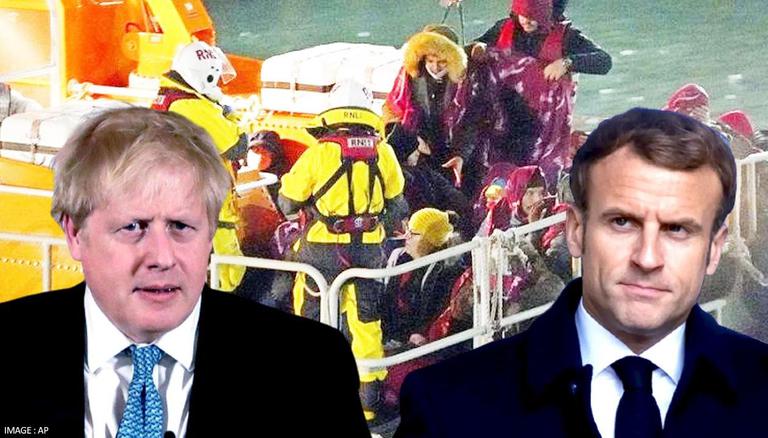 
In a rather aggravated response to the UK Prime Minister Boris Johnson's letter publicly asking France to 'take back migrants' after the English Channel boat tragedy,  French President Emmanuel Macron on Friday indicated that he does not want to be preached by the British leader about course of action regarding 27 migrants death at the coast of Calais. Accusing the UK PM of not being "serious" about migrant crossings the English Channel, the French government’s official spokesperson, Gabriel Attal, told French television BFM TV on Nov. 26 that France believes Johnson's so-called publicly posted letter was "mediocre" in terms of the content, disrespectful and in bad taste. Johson's letter disregarded all the work that had been done by the French coastguards, police, gendarmes, and lifeboat crews, he asserted.

"It [UK PM's letter] basically proposes a ‘relocation’ agreement, which is clearly not what’s needed to solve this [English Channel] problem. We’re sick and tired of this double talk and outsourcing of problems," French President Macron's official spokesperson, Gabriel Attal, said in his televised remarks.

'As soon as problem arrives, Johnson considers it is Europe’s responsibility': Macron's spokesperson

France's official, furthermore, purported that the migrants were trying to cross the English Channel to enter the UK.  "What we need is for the British to send immigration officers to France to examine here, on French territory, demands for asylum in Britain," Attal told France's BFM TV.  The 'tone deaf' letter did not in the least reflect the exchanges Macron had with Boris Johnson, the French official continued, adding that it’s as if the UK PM "was regretting leaving Europe". He then lambasted the UK leader, asserting that as soon Britain has a problem Johnson considers that it is Europe’s responsibility to solve it. "It doesn’t work like that – it works through cooperation," he said.

READ | Boat gets stuck on top of rock in English Channel; crew members have miraculous escape

On Friday, Johnson asked Macron to take back migrants who landed in the UK after crossing the Channel. The British PM took to his official Twitter handle to publish a document which he addressed to Macron after at least 27 migrants lost their lives while trying to enter England. Johnson, in the letter that aggravated France, mentioned five measures that Paris can take in order to avoid fatalities in the English Channel.

“I propose that we put in place a bilateral readmissions agreement to allow all illegal migrants who cross the Channel to be returned," wrote the UK's PM. He further added, “This would have an immediate effect and would significantly reduce - if not stop- the crossings, saving lives by fundamentally breaking the business model of the criminal gangs.” Johnson also suggested that he was “open” to new ideas that would help to stop the trade in humans and also to protect lives.