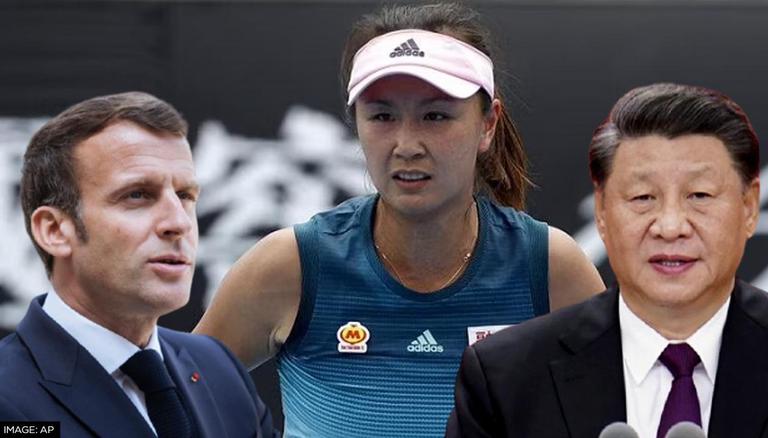 
France on Sunday warned the Chinese authorities to “let tennis star Peng Shuai speak publicly to clarify what’s happening” or face the diplomatic consequences. Speaking with France’s LCI television, Paris' Foreign Minister Jean-Yves Le Drian said “I’m expecting only one thing: that she [tennis star Peng Shuai] speaks,” adding that if China does not clear up the situation there will be an action as three-time Olympian Peng’s whereabout and her disappearance has now become an international issue. Either the Chinese government themselves must provide an explanation about the recent events concerning the female player or let her speak, French Foreign Minister Drian stated in an assertive tone.

Everyone should be able to speak their truth and be heard. Women’s rights need to be advanced in many countries around the world and we should all work to make that happen. Just as everyone in pro tennis should support Peng Shuai pic.twitter.com/2ANrK2b4n0

Meanwhile on Sunday, Peng Shuai said she was safe and well in a video call, the International Olympic Committee has said, amid growing international demands for assurances that she is free and not under threat. Also, official photographs published by the tournament organized by China Open showed Peng Shuai signing tennis balls at the Fila Kids Junior Tennis Challenger Finals, attired in a dark blue jacket and white trousers. Photos of Peng at the Fila tournament were also posted on Twitter by Ding Li, a long-time friend of Peng, and a senior executive of Global D-Sports that manages the athletes via the information app Tianyancha. The latter wrote on Twitter that the Chinese tennis star's phone was finally switched on.

Why her hair is different than on the videos from the same day at Fila Kids Junior Tennis Challenger Final? Deepfake? pic.twitter.com/15QNJUP4rx

WTA chairman and CEO Steve Simon had told Time magazine last week that the association had tried several means to get in touch with Peng but couldn't.

We are united with the rest of tennis in the need to understand that Peng Shuai is safe.

The tennis player's photos and the videos suddenly started to appear online after mounting global pressure on Xi Jinping's government, although the authenticity of the images, Peng's new WeChat account, and her prolonged 'mute' over the issue has come under global scrutiny. Many on Twitter, concerned about the Chinese player's safety argued that peng was subjected to threats and pressure by the Chinese government that instated online censorship on her account just minutes after she posted the controversial letter accusing the former Chinese Vice Premier Zhang Gaoli of forcing her into having sex.

Chinese state government's mouthpiece Global Times 'acquired' video clips of Peng visiting a popular restaurant in downtown Beijing for a meal, where Ding was also present. The paper claimed that the accomplished tennis star's video was shot as early as on Saturday, adding that her outing was confirmed by Sichuan restaurant's manager Zhou Hongmei, where Peng was present with seven other people.

International Olympic Committee (IOC) President Thomas Bach, earlier yesterday, also held a 30-minute video phone call with Chinese tennis star Peng Shuai, and later announced that the Chinese tennis star is "safe and well." Although the tennis star remained mute about the #MeToo allegations she made against the former Chinese politician and insisted that she "would like to have her privacy respected at this time”.

China’s former doubles world No. 1 has not spoken or made public comments since her on Nov. 2 sexual assault allegation made against the former Chinese vice premier Zhang Gaoli from President Xi Jinping’s powerful Chinese Communist Party. Since then, neither 75-year-old Zhang that formerly served Politburo Standing Committee nor the Chinese government or President Jinping made any comments on the controversy. In what is being suspected as the political crackdown against the tennis star by the Chinese Communist Party, her post was taken down abruptly, and immediate online censorship was instated on her account.

Unless PengShuai shows up on Weibo or any TV news outside China. nobody thinks your trick will do any magic.

look, the champion wall of the China national tennis center, there was a portrait of Peng Shuai is no longer there. pic.twitter.com/cPR5a9Ih48

The Peng Shuai case has made it all the way to the White House:

After reporting she had been assaulted by a Chinese official, Peng Shuai has gone missing. More proof of the disgusting ways of the CCP.

I commend the @WTA for having the courage to stand up to China when others cower.

We must continue public pressure. #WhereIsPengShuai

Earlier France’s Ministry for Europe and Foreign Affairs joined the US and demanded proof of Peng’s wellbeing raising concerns about her sudden disappearance and reports that she hasn’t been seen in weeks. Paris has been "greatly concerned by the lack of information on the whereabouts of tennis player Peng Shuai, which is worrying the international community and the sports community,” France’s Ministry for Europe and Foreign Affairs said in a statement. “We call on the Chinese authorities to implement their commitments to the fight against violence against women, specifically under the national domestic violence law that came into effect in 201,” the French Foreign Ministry stated.

“France is committed to promoting the freedom of speech, gender equality, and the fight against sexual and sexist violence worldwide,” the French Foreign Ministry asserted.