Macron Raises Migration, Rule Of Law & Other Issues Of Concern At V4 Summit In Budapest

“Respect for the rule of law, media pluralism, and the fight against discrimination are at the heart of the European project,” Macron told the press conference. 
French President Emmanuel Macron’s Hungarian visit entailed talks related to the issues of immigration, the rule of law, the Western Balkans, energy, including nuclear energy with the leaders of the Visegrad Group (V4), the alliance of the four central European countries—Poland, the Czech Republic, Slovakia, and Hungary, which are also members of the EU and of NATO.

“Respect for the rule of law, media pluralism, and the fight against discrimination are at the heart of the European project,” Macron told the press conference, according to Associated Press. 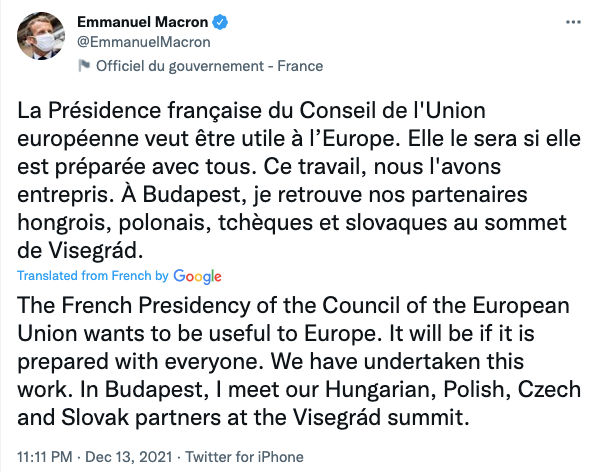 Rule of law fundamental bloc's for progress, committed to work together: French PM

French leader, during his meeting with Orban, agreed that his country is “committed to work together for Europe and to be loyal partners.” The right-wing populist Hungarian leader challenges the EU’s values and its jurisdiction on affairs of the bloc’s 27 nations. Meanwhile, Orban and his Polish counterpart Prime Minister Mateusz Morawiecki had been at loggerheads with Brussels about controlling governments, which the two EU nations see as a violating rule of law and democratic standards. European Union’s eastern nations gathered to discuss the challenges relating to the EU’s authority on the bloc and its future course.

🇫🇷🇭🇺🇸🇰🇨🇿🇵🇱leaders emphasised the importance of V4+FR dialogue, #V4 thanked @Macron for the constructive discussion in prep. for FREUPRES🇪🇺

"We spoke thoroughly and exhaustively about migration, about the question of the rule of law, about the Western Balkans, about energy, especially about nuclear energy and its ETS (Emissions Trading System) energy billing system," the Hungarian Prime Minister Viktor Orban told a joint press conference after the meeting. He also held a bilateral meeting with Macron. "We will agree with President Macron on the issue of patriotism, the strengthening of Europe and European strategic autonomy," Orban said.

Leaders have a frank discussion on current EU issues ahead of FR🇫🇷EUPRES, inc. the future of #Europe, #climate & #energy policy and the importance of #nuclear energy, #migration & support for the #Balkans. pic.twitter.com/VYpLWmJaX0

Hungary assumes the current presidency of the V4 Group, which includes Hungary, Poland, the Czech Republic and Slovakia,” he told the press conference. "Hungary was the only one that said that if necessary, the EU border should be protected with physical force, and thus not only Hungary but the whole of Europe would be protected," he said. "We didn't get a single good word, and we even had to suffer the harshest attacks when we defended Europe's borders, we were regularly shot in the back from Brussels and some European capitals.” 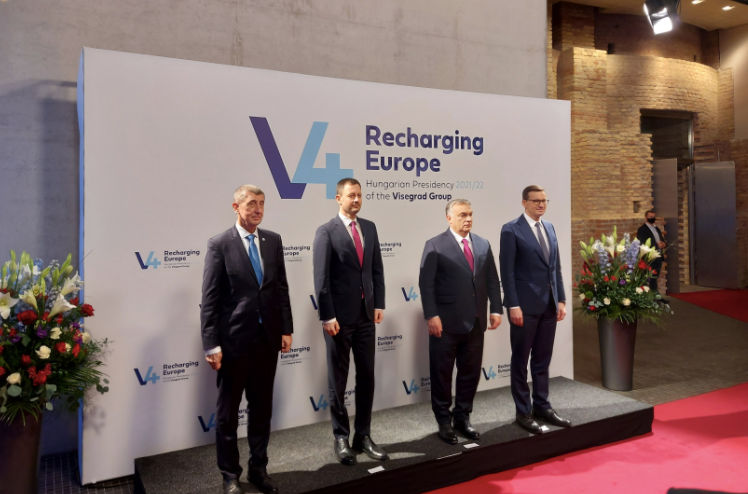 Macron, in turn, told the conference that despite the differences, he sees a strong European partner in Orban, adding that the fundamentals of  moving the bloc forward are the "media plurality, rule of law and the respect of fundamental rights.” He also noted common areas of interest between Budapest and Paris, which he said were nuclear energy, agriculture, and a European defence policy.

In recent months, both Poland and Hungary have been involved in a tussle with Brussels over rule of law, judicial and press freedom, and human rights. EU imposed several new “conditionality" on the two nations to instate the rule of law and anti-corruption criteria for releasing the coronavirus recovery funding.  Czech Prime Minister Andrej Babis said at the conference that his government was ready to deploy the soldiers at the Polish frontiers or to the Balkans. Slovakia's Prime Minister Eduard Heger underlined that despite the political differences, the EU was the only source of development and wealth for the Visegrad [V4] nations.