Over 100 Afghans, Iranians Protest Outside UN Vienna Office Against Taliban

On Sunday, a group of 100 Afghans and Iranians protested against the Taliban in front of the United Nations office in Vienna. 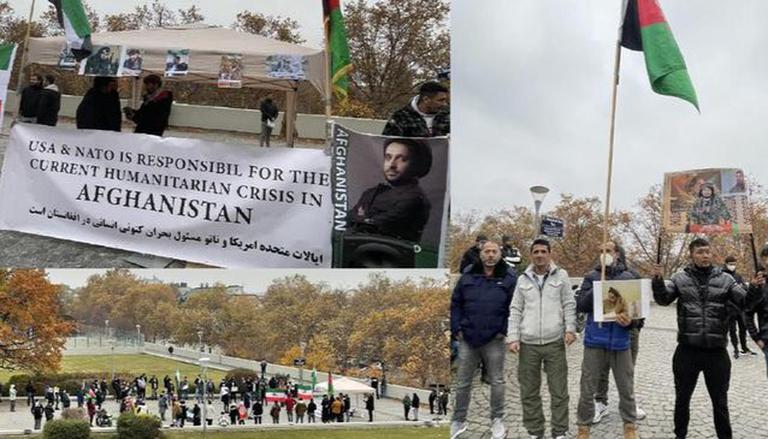 
On Sunday, a group of 100 Afghans and Iranians protested against the Taliban in front of the United Nations office in Vienna and denounced the Taliban's administration in the midst of Afghanistan's severe humanitarian catastrophe. The demonstration in Vienna is part of a worldwide event planned by supporters of the National Resistance Front (NRF) and Iranian diaspora organisations.

The demonstrators carried three flags, which were the resistance banner, the Afghan flag and the Iranian flag. While criticising the Taliban, they shouted "death to the Taliban," "No to the Taliban," and "Do Not Recognize the Taliban." For the ongoing humanitarian crisis in Afghanistan, slogans were also raised against the US and NATO. Some even criticised Pakistan for its role in the conflict, holding banners that read, "Death to the Taliban, Pakistani ISI's puppets."

After more than ten weeks in power, the Taliban government in Afghanistan is facing its toughest test yet in handling the country's governance, and its utter failure is endangering regional stability. Last week, participants at the Troika Plus meeting on Afghanistan, which included representatives from Russia, China, the United States, and Pakistan, expressed grave worry about the dire humanitarian and economic situation in Afghanistan and urged for support for the Afghan people. The countries also stressed that providing full and equal access to education for women and girls at all levels is an international commitment, and urged the Taliban to step up their efforts to offer full and equal access to education throughout the country.

To discuss various aspects of Islamic law as well as major issues affecting women's rights in Afghanistan, Mette Knudsen, the UN special envoy for the UN Assistance Mission in Afghanistan (UNAMA), met with female religious scholars in the Afghan capital Kabul. She had many rounds of talks with the Taliban, to address a number of issues, including humanitarian aid.

Recently, it was announced that the Taliban was forming a military tribunal to implement Sharia law in Afghanistan on the orders of its highest leader, Hebatullah Akhundzada. According to the Express Tribune, Obaidullah Nezami has been appointed as the tribunal's chief, with Seyed Aghaz and Zahed Akhundzadeh as his deputy. The military tribunal has the jurisdiction to interpret Sharia judgements, make decrees concerning Islamic civil rules, and record complaints, lawsuits and petitions against police, army and intelligence officers.