Male teachers in Spain joined the ‘Clothes Have No Gender movement’ and wore skirts to the classrooms to fight the stereotypical gender norms. 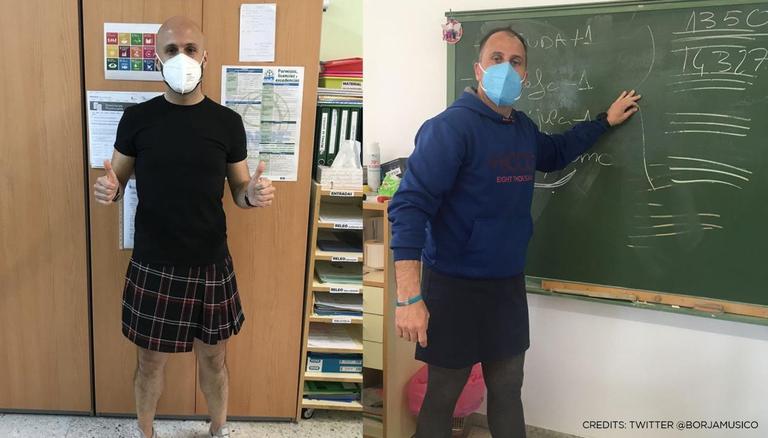 
Male teachers and students in Spain joined the ‘Clothes Have No Gender movement’ (#laropanotienegenero) and wore skirts to the classrooms to fight the stereotypical gender norms. Teachers across the country joined the movement which was sparked after a boy was expelled for wearing a skirt to school last year. Manuel Ortega and Borja Velazquez are the latest teachers to ditch their trousers for the “female attire” after one of their pupils was bullied in class this month.

According to the Metro UK, the pair wanted to show support after the boy was mocked for wearing an anime t-shirt at the Virgen de Sacedon primary school in Valladolid. The boy was called homophobic slurs and ended up changing out of embarrassment. Ortega was horrified to know about the incident after which he decided to wear skirts to class, along with colleague Velazquez, to “promote tolerance”.

Velazquez tweeted, “A school that educates in respect, diversity, co-education and tolerance. Dress as you want! We join the initiation “.

To ‘increase tolerance and respect’

While speaking to El Pais, the men said that their decision to wear skirts was not just for a viral social media moment. But they wanted to “increase tolerance and respect” while extending the invitation for other teachers to do the same.

As per reports, the movement began on October 27 last year when a student named Mikel Gomez was expelled and referred to psychologists after wearing a skirt to a school in Bilbao, the Basque Country. The boy had shared a now-viral video on TikTok explaining that he had wanted to show support for feminism and diversity. Since then, November 4 has become “wear a skirt to school day” while hundreds of students and teachers have joined the movement to show solidarity.

READ | Pep Guardiola says he needs a break, wants to go to Spain to spend time with family

Another teacher, Jose Piñas also decided to start wearing a skirt to class last year. While taking to Twitter, he said, “20 years ago I suffered persecution and insults for my sexual orientation in the institute where I am now a teacher… many teachers, they looked the other way. I want to join the cause of the student, Mikel, who has been expelled and sent to the psychologist for going to class with a skirt”.

The teachers have received praise from parents online. One said, “My son (13 years old) went to class with a skirt yesterday. They had agreed between several students to do it… I’m proud”. Another added, “Congratulations on your attitude. High schools are sometimes very hard for students, you have to know how to be aware of it and position yourself without nuances to guarantee yourself safety from attacks”.