Amid the ravaging war in Eastern Europe, Chinese President Xi Jinping stated that the situation in Ukraine has "sounded an alarm for humanity." 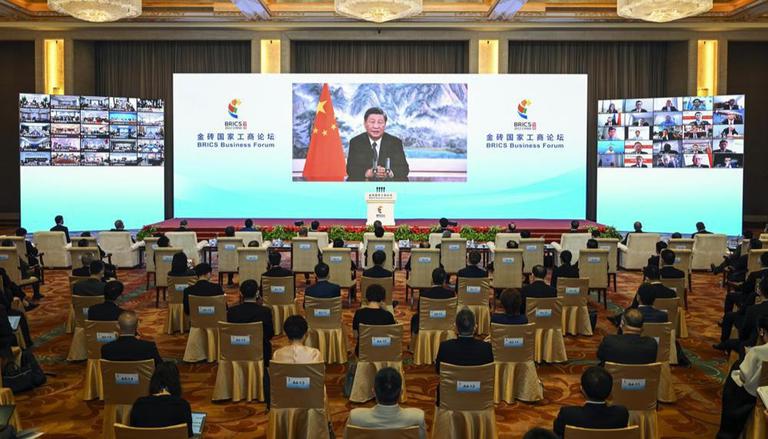 
Amid the ravaging war in Eastern Europe, Chinese President Xi Jinping stated that the situation in Ukraine has sounded "an alarm for humanity." He also criticised the US-led sanctions against Russia and accused the West of inciting Moscow. Jinping made these remarks while speaking at the opening day of the virtual BRICS business forum on Wednesday, June 22. Russian President Vladimir Putin, who was also present, would have been pleased to learn from Jinping's keynote speech that Beijing continues to assist Moscow amid the ongoing conflict.

"The Ukraine crisis has again sounded the alarm for humanity. Countries will surely end up in security hardships if they place blind faith in their positions of strength, expand military alliances, and seek their own safety at the expense of others," Xinhua news agency quoted Jinping as saying. He further referred to the sanctions as a "politicised" move and claimed that they were imposed with the intention of destabilizing the world economy.

Jinping terms US sanctions on Russia as 'double-edged sword'

Speaking further about the sanctions, the Chinese President termed them as a "double-edged sword" that has the potential to devastate people around the world. Without directly mentioning the Biden administration, Jinping stated that the sanctions were put in place to demonstrate its dominance in international financial and monetary systems rather than with an intention to punish Moscow. The Chinese leader also claimed that the actions will ultimately harm the Western countries as well as bring disasters to people across the globe.

In addition, Jinping stated that China would work to mitigate the harm the COVID-19 pandemic is causing to global supply chains. Meanwhile, China's increasingly assertive foreign policy and desire to dominate global markets have also led to criticism in the US as well as in Europe, including proposals to replace Chinese suppliers and lessen reliance on the Chinese economy. “Economic globalization is an objective requirement for the development of productive forces and an irresistible historical trend," Jinping added.

Zelenskyy lauds assistance provided by US

It is pertinent to mention here that several Western countries have imposed numerous sanctions on Russia after it launched a full-fledged war on Ukraine on February 24. Ukrainian President Volodymyr Zelenskyy has also lauded the assistance provided by the United States, stating that the country has become "a true leader in Ukraine's international support." Notably, the US and its allies have continued to provide humanitarian, financial as well as military support to the war-torn country.