British PM Rishi Sunak on Wednesday took to Twitter and shared a picture of himself with his Indian counterpart PM Modi on the sidelines of the G20 Summit. 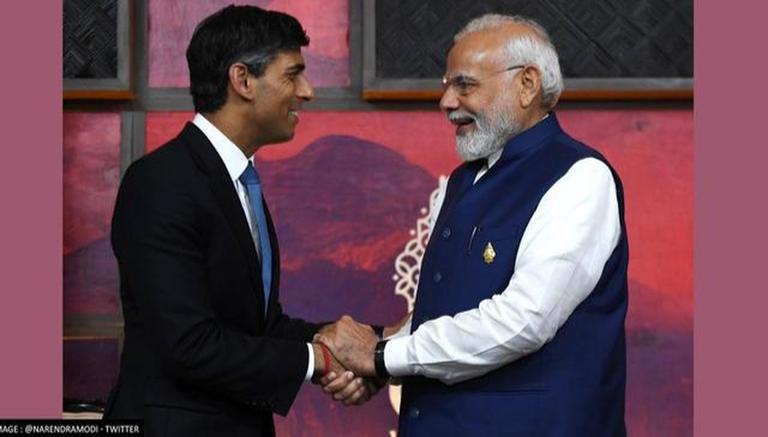 
British Prime Minister Rishi Sunak on Wednesday took to Twitter and shared a picture of himself with his Indian counterpart PM Modi on the sidelines of the G20 Summit in Indonesia.

The British leader is seen shaking hands with Prime Minister Modi in the picture with a caption that reads, "United by friendship." Also, the Hindi translation of the caption was written by the UK PM's official Twitter handle which said, "Ek Mazboot Dosti." Earlier on Tuesday, Sunak shared a series of pictures with world leaders like US President Joe Biden and German President Olaf Scholz, including PM Modi.

On Wednesday, the British Prime Minister held talks with PM Modi, covering important issues concerning trade cooperation, mobility defense and security between UK and India. Notably, this was the first face-to-face meeting between PM Sunak and PM Modi after the former assumed office.

READ | Rishi Sunak confronts Russian leaders at G20, says Putin should have come to 'face us'

"It was great to meet PM Rishi Sunak in Bali. India attaches great importance to robust India-UK ties. We discussed ways to increase commercial linkages, raise the scope of security cooperation in the context of India’s defence reforms, and make people-to-people ties even stronger," he tweeted.

On the last day of the G20 Summit, PM Modi gifted British PM Rishi Sunak a handmade textile from Gujarat, which depicts Maa Durga. The handmade textile is known as "Mata Ni Pachedi" and it is offered at the altar of temples.

READ | Rishi Sunak says he is committed to trade deal with India, adds a word of caution

It is a handmade textile of Gujarat and an offering in temple shrines which house Mother Goddess. The name is derived from Gujarati words ‘Mata’ meaning ‘mother goddess’, ‘Ni’ meaning ‘belonging to’ & ‘Pachedi’ meaning ‘backdrop’ pic.twitter.com/ycf3sffy15