The initiative on Twitter with the hashtag, “G20pecharcha”, will enable the netizens to ask Shringla questions regarding the international event. 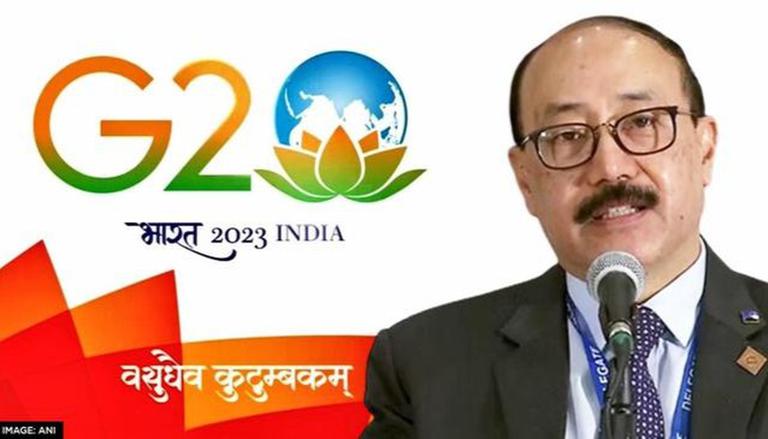 On January 21, Shringla took to Twitter to announce the initiative. The tweet reads, “50 days of India’s #G20Presidency 8 meetings in 6 cities. Hon’ble PM Shri @narendramodi’s vision is to make each & every citizen a stakeholder in #G20India. Use hashtag #G20PeCharcha and ask #G20 Chief Coordinator @harshvshringla anything about G20 on the 20th of every month!” As per the announcement, the chief coordinator for India's G20 Presidency will answer all the questions relating to G20 on the 20th of every month. Shringla even began answering some of the questions on Friday.

From disaster resilience to the Global South, Shringla answers it all

As the initiative was implemented in full swing, Shringla answered several poignant questions that were asked on Friday. One Twitter user asked the India G20 Presidency Chief Coordinator about how India will use the G20 platform to address the need to increase disaster resilience in India. Answering the query of the Twitter user, Shringla wrote, “This is an important area of concern for developing countries which are facing greater vulnerabilities due to climate change, and to tackle this India has established a new working group on Disaster Risk Reduction ½”. “The aim is to encourage collective work by the G20, to undertake multi-disciplinary research and exchange best practices on disaster risk reduction,” he added. 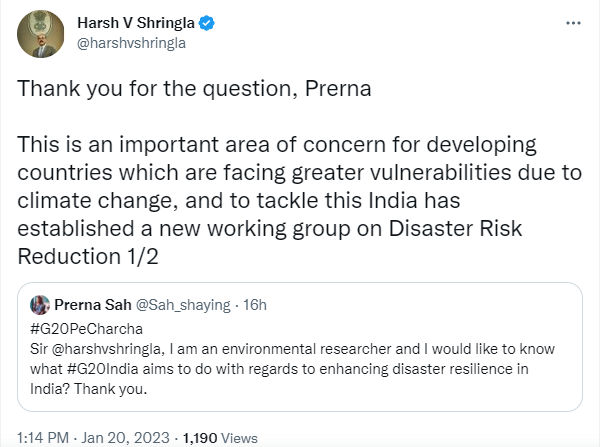 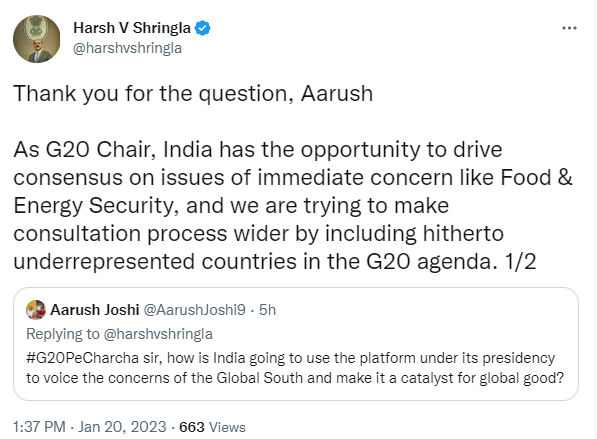 Shringla also had a spontaneous response when he was asked how India intends to raise the concerns of the global south at International events. “As G20 Chair, India has the opportunity to drive consensus on issues of immediate concern like Food & Energy Security, and we are trying to make the consultation process wider by including hitherto underrepresented countries in the G20 agenda,” Shringla wrote on Friday. The India G20 Presidency Chief coordinator also mentioned the largest virtual conference of the countries of Global South, which was organised by India. Shringla made it clear that one of the presidential aims of India is to include the concerns of the Global South as well. In 2022, India formally assumed G20 presidency from its predecessor  Indonesia. The motto of this year’s summit is, “One Earth, One family, One future”, and India will be hosting around 200 G-20-related events including the marquee which will be organised next year.