A Massachusetts woman believed that she took part to run a half marathon near her home, not halfway across the Atlantic ocean in Worcester city in England

READ | US Stresses On Diplomacy With Iran Ahead Of UNGA

The incident reportedly happened on September 15 when she thought she signed up to take part in Worcester city marathon in US state of Massachusetts and not Worcester, England across the Atlantic. The marathon participant who goes by the name of Sheila Pereira learnt that a little late when the Worcester City Half Marathon was actually held in Worcester, England and not Worcester, Massachusetts. Anyhow, She ran 13 miles only on side of the pond. According to reports, Pereira had sent the British race organizers a photo of her route from Worcester to Shrewsbury. Sheila's fitness app, however, did show that she did complete her own marathon in 2 hours, 5 minutes. Later, when Pereira explained the confusion, the Worcester City Half Marathon sent her a medal, shirt and an encouragement to travel and participate in England's marathon next year.

The netizens have reacted on this marathon mix-up with many expressing their funny side on social media website Twitter. A user said that  "Don't tell her that almost every city in America has a British namesake" said a user. Another user said reacted to the mix-up confusion with a gif of 'why?'. "I prefer Worcester sauce on a not so great stake. Better than a marathon" said another user. A user reacted to the goof-up with a gif of Robert Downey Jr. facepalming. Another user wrote, "I will bet she lost the race as well."

I will bet she lost the race as well. 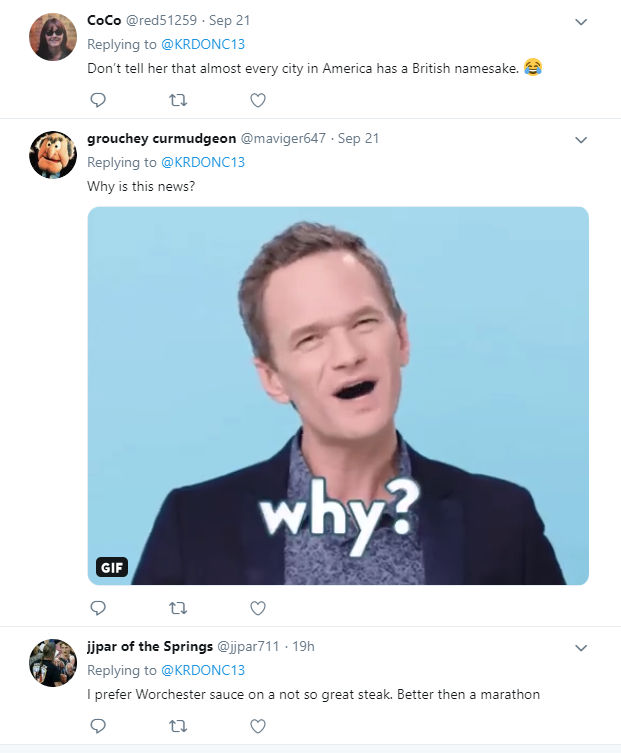 READ | US: Will Give Diplomacy With Iran 'every Opportunity To Succeed'