Lebanon procured 28,500 doses of the Pfizer-BioNTech vials with the aid of the World Bank that allocated $34 million in funding under existing health project

Under World Bank's watch, Lebanon on Saturday received a consignment of its first batch of COVID-19 vaccines that landed at Beirut’s Rafic Hariri International Airport. The country, with the aid of the World Bank, procured 28,500 doses of the Pfizer-BioNTech vials, and approximately 2.1 million doses are expected to arrive throughout the year in separate shipments. As the Mediterranean nation is set to launch a mass vaccination campaign for its population, World Bank said that it will ‘closely monitor’ the inoculation to ensure that the jabs were administered to the high-risk vulnerable groups with known comorbidities. It allocated $34 million in funding under an existing health project in Lebanon to procure the jabs to kick start the vaccination program. The consignment arrived from Belgium and was stored at the Ministry of Health, ready for distribution across medical centers.

28K #covid19 vaccine doses have been delivered today to #Lebanon out of 2 MILLION doses that will be delivered over the coming few weeks.
Again, PRIORITY groups first. Register NOW....#NoWasta. pic.twitter.com/FNTnf35wiX

"We will monitor fair and transparent distribution to priority groups," Ferid Belhaj, the regional vice president, wrote in a tweet. He added, that the health workers and the elderly would be first in line, and warned against favouritism and jumping the turn as vaccination rolls out in a phased manne

1st batch of #COVID19 vaccine will arrive in #Lebanon tomorrow.
We will MONITOR fair and transparent distribution to PRIORITY groups as agreed with Gov: health workers, people aged 65+, epidemiological and surveillance staff, and people aged 55-64 years with co-morbidities.

Health minister Hamad Hassan told reporters that the arrival of vaccines was “a dream come true”, while the head of Rafik Hariri hospital, Firass Abiad, called it the “best gift one can ask for on Valentine's Day," on Twitter. Under WHO’s global COVAX alliance, Lebanon has procured an additional 2.7 million doses of Pfizer, and  1.5 million doses of AstraZeneca, although the talks are still ongoing. With the jabs secured so far, the country will be able to vaccine half of its total 6 million population, which includes Syrian refugees. 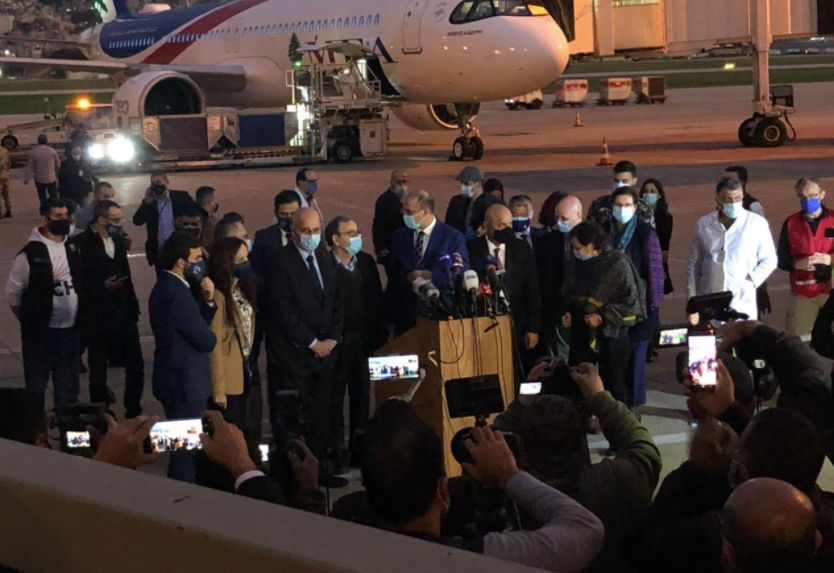 Health Minister Hamad Hassan told state media that the vaccine would be made available to all Lebanese citizens, and the government is set to start a mass vaccination drive on Sunday. Lebanon’s Prime Minister Hassan Diab, aged 61, is speculated to get the vaccine in the first phase of the inoculation. Earlier, due to the notable surge in the confirmed cases of COVID-19, Lebanese authorities began enforcing an 11-day nationwide shutdown and a stringent curfew,  to limit the spread of coronavirus infections spinning out of control after the holiday period. For the first time, residents were instructed to request a one-hour permit to be allowed to leave the house for "emergencies," including going to the bakery, pharmacist, doctor, hospital, or airport, AP reported.

WE RECOMMEND
Canada detects first case of Brazilian coronavirus variant in Toronto; man hospitalised
How are experts tracking variants of the coronavirus?
Study sheds light on how coronavirus may hijack human cells
UK could be 'more or less free' of worst coronavirus effects by December, says expert
Malaysia to offer free coronavirus vaccinations to millions of foreign workers: Minister