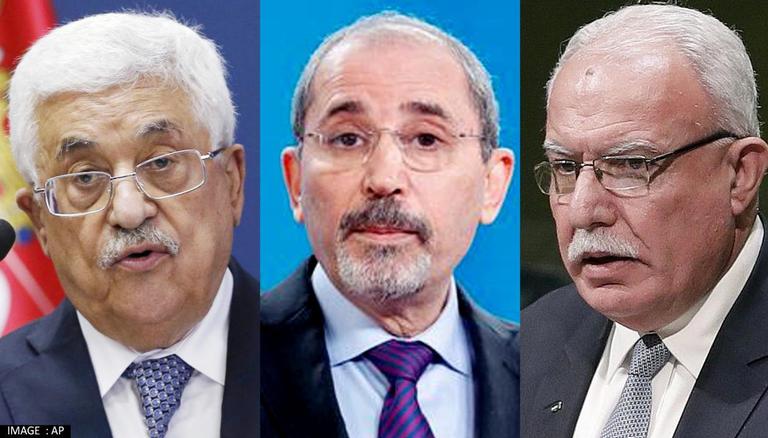 
Palestine President Mahmoud Abbas met with Jordanian Foreign Minister Ayman Safadi on Saturday to address issues pertaining to the Palestine state and to improve dialogue and in-depth collaboration between the two nations. During a news conference, Safadi said that this visit took place "as part of the efforts to create a real political horizon that leads to a comprehensive and just peace on the basis of the two-state solution," Xinhua reported.

"The current situation in the Palestinian territories and pushing forward the stalled peace process in the Middle East were the major issues that were discussed in today's meeting," Palestinian Foreign Minister Riyad al-Maliki said at a joint press briefing with Safadi.

According to the Jordanian foreign minister, the foundation embodies the formation of an independent Palestinian nation with Jerusalem as its capital based on the 1967 boundary demarcations.

Safadi said that the existing condition cannot be maintained this way which is basically deadlock. He added that a proper global movement is necessary to drive the situation toward active involvement to find a solution. Safadi further highlighted that during the meeting, the officials also talked about the significance of providing the Palestinian Authority with the necessary financial assistance so that it may continue serving the Palestinian people.

The Israeli-Palestinian conflict began in 1967 when Israel took control of the Gaza Strip, West Bank, Golan Heights, and portions of the Sinai Peninsula during a six-day battle. Following that, the Israeli government began building settlements in disputed areas in West Bank, resulting in ongoing tensions between the two nations. Further, direct peace discussions between Israel and Palestine, which had been sponsored by the United States for nine months, came to an end in 2014 due to fundamental disagreements over Jewish settlements and the acknowledgement of a Palestinian state based on the 1967 boundaries.