Pope Calls Female Genital Mutilation A Crime That Must Stop

Pope Francis called female genital mutilation a “crime” on Sunday and said the fight for women's rights, equality and opportunity must continue for the good of society. 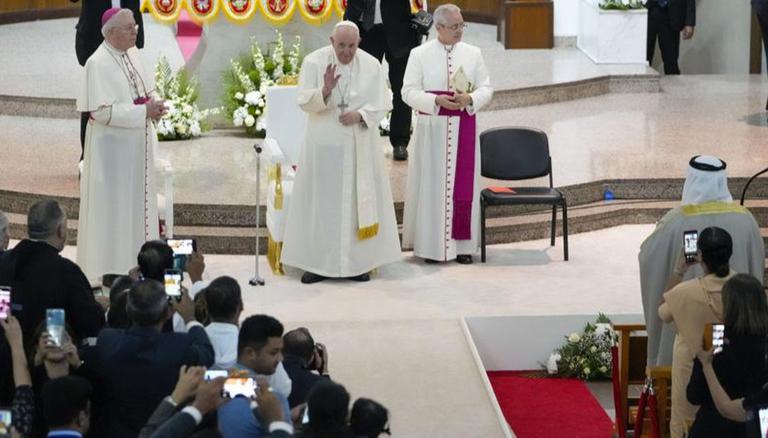 
Pope Francis called female genital mutilation a “crime” on Sunday and said the fight for women's rights, equality and opportunity must continue for the good of society.

“How is it that today in the world we cannot stop the tragedy of infibulation of young girls?” he asked, referring to the ritual cutting of a girls' external genitalia. “This is terrible that today there is a practice that humanity isn't able to stop. It's a crime. It's a criminal act!” Francis was responding to a question about women's right en route home from Bahrain. He was asked whether he supported the protests in Iran sparked by the death in custody of 22-year-old Mahsa Amini, who was detained by morality police after allegedly violating the country's strict dress code for women.

Francis didn't directly respond, but gave a lengthy denunciation of how women in many cultures around the world are treated as second-class citizens or worse and said: “We have to continue to fight this because women are a gift.” “God ... created two equals: man and woman,” the pope said.

Francis has done more than any pope to give more decision-making roles to women in the church. He has appointed several women to key governing positions, including the No. 2 in the Vatican City State administration as well as several other high-ranking management roles. He has also named women — laywomen and religious sisters — as consultors to Vatican offices dominated by male clergy, including the one that chooses bishops.

“I have seen in the Vatican, that whenever a woman enters to work, things improve,” he said.

He said society would do well to follow suit, noting that his native Argentina remains a “macho” culture, but that such attitudes “kill” humanity.

Francis was also asked about new cases of clergy sex abuse and cover-up that have emerged in the French church, with evidence that a bishop was allowed to quietly retire in 2021 despite having been found guilty by a church investigation of having spiritually abused two young men by making them strip during confession. More victims have reportedly come forward since the scandal was first reported.

Francis didn't reply when asked if such church sanctions should be made public going forward. But he insisted that the church was on the right path, even reviewing bad past canonical investigations and redoing them. He said the church was committed to not hiding abuse even if there are still some in the church “who still don't see clearly, who don't share” the need for justice.

“It's a process we're doing with courage, and not all of us have courage,” he said. “Sometimes there's the temptation of making compromises -- we are enslaved by our sins.” But he said the goal was toward further clarity, noting that he had recently received two reports from victims lamenting their abuse and how their cases had been “covered up and then not adjudicated well by the church,” “I immediately said Study this again, do a new judgment.' So we're now revising old judgments that weren't well done,” he said. “We do what we can. We're all sinners.”