From referring to the Taliban as 'civilians' to reportedly sending commandoes to fight the Afghan forces, Pakistan has drawn massive flak from Afghanistan. 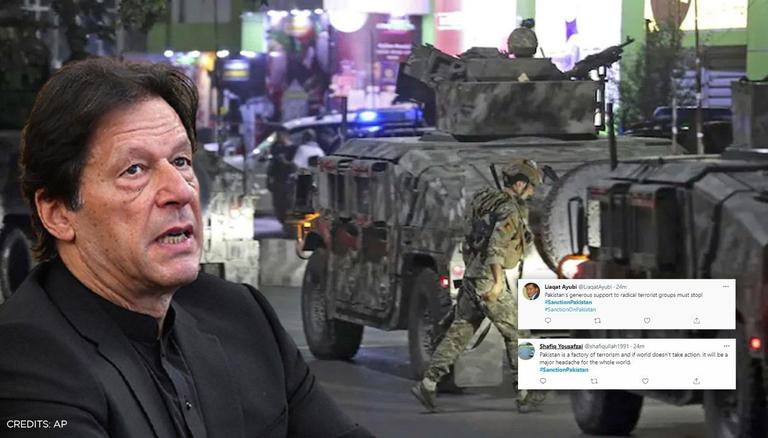 
Pakistan's blatant support for the Taliban is no hidden secret. Afghanistan Foreign Minister Mohammad Haneef Atmar has revealed that the Taliban is colluding with several regional terrorists from Lashkar-e-Taiba (LeT) and other Pakistan-based terror groups to carry out attacks in Afghanistan. From referring to the militant group as 'civilians' to reportedly sending its commandoes to fight the Afghan security forces, Pakistan has drawn massive flak from war-torn Afghanistan for assisting terror on their soil. The alleged involvement of the Imran Khan-led nation has reached a point where Afghanistan authorities, including Vice President Amrullah Saleh, have begun demanding UN sanctions against Pakistan to bring a stop to the violence.

Joining the call, Afghan netizens on Monday trended #SanctionPakistan asserting that there will be no permanent ceasefire until Pakistan's 'generous support' to radical terrorist groups is brought to a stop. The netizens also requested friendly nations such as India and the USA to support Afghanistan in the war and go global with the trend so that action could be taken against Pakistan-backed bloodshed on Afghan soil.

There will be no permanent ceasefire in Afghanistan without sanctions against Pakistan.

Be a voice for Afghanistan at this difficult times. Help end the bloodshed and the forever Pakistani proxy war. The least good folks can do is to make the #SanctionPakistan trend go global, on all platforms.

I request to all Indian and other friends please follow my Tweeter account and support Afghanistan 🇦🇫 people in this crucial time.
Those people who follow the sent me a message.#SanctionPakistan pic.twitter.com/sypM3xpSJg

The Afghan people appeal to the UN/ the international community, Pakistan's intelligence agency to shed the blood of innocent Afghans in Afghanistan in the name of jihad, so take strict action against terrorists, otherwise the region will burn to the ground.#SanctionPakistan pic.twitter.com/9vOVkZGmmb

With Afghanistan reeling under war, the country's first Vice President Amrullah Saleh joined a civilian protest against the Taliban and Pakistan last week. While marching on the streets of Kabul, the Vice President slammed Pakistan for its support to the Deobandi Islamist movement and military organization. The former director of the National Directorate of Security, who has always been vocal against Pakistan's support for the Taliban, took to the microblogging site and termed the protest "a historic moment" against Tablian terrorists and their supporters.

His call was supported by the Afghanistan Vice President who said that the response was 'on the way' and that the nation had just passed out of the 'shock period.'

Minister @calxandr it is just the beginning. We needed time to get passed from the "shock period". It is on the way. The Afghan way. https://t.co/iCT6SWc1Vo