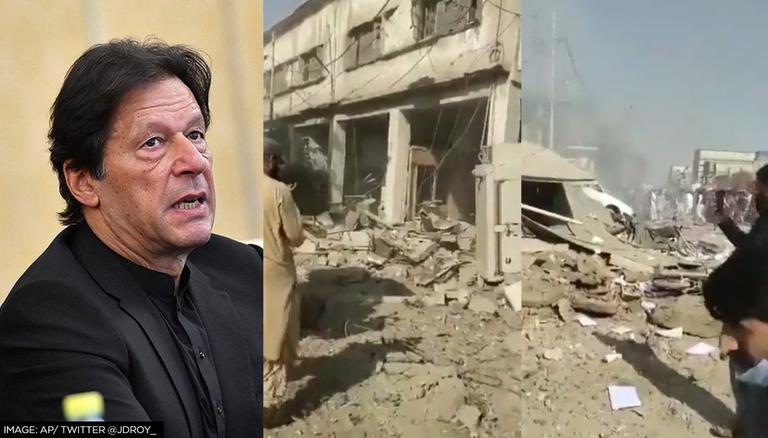 
At least 15 people in the Pakistani port city of Karachi were killed on Saturday, Dec. 18 including Prime Minister Imran Khan’s Tehreek-e-Insaf (PTI) party’s MNA and Fixit founder Alamgir Khan’s father Dilawar Khan, after a massive explosion was caused due to the leakage from a gas pipeline. The incident, which is being probed by the police, occurred at a branch of Habib Bank Limited in an industrial area and caused severe injuries to more than a dozen. Shaheed Mohtarma Benazir Bhutto Accident Emergency and Trauma Centre head Dr Sabir Memon informed The News that the death toll from the blast was 15 but may increase.

Several people have lost their lives in the blast," Waqas Ahmad, a spokesperson for the city police, told dpa. Many others were wounded. It is being speculated that the death toll may go up, the latter said.

#KarachiBlast My condolences goes to the families who lost their beloved one's in a Karachi blast. pic.twitter.com/h9ktEuMY98

Heartfelt condolences to PTI's MNA Alamgir Khan and to the families of the vicitims of the blast at Sher Shah Paracha Chowk in Karachi. May Alamgir Khan's father and all the victims rest in peace. May the families find the strength to near the irreparable losses.

The blast that shook Pakistan came in the backdrop of the 17th session of the Council of Foreign Ministers of the Organization of Islamic Cooperation, or OIC, held in Islamabad. Pakistan’s Prime Minister Imran Khan-led administration was scheduled to hold discussions about the humanitarian crisis in Afghanistan. After the incident unfolded, the PTI Karachi President Khurram Sher Zaman confirmed that the father of Alamgir Khan was among the casualties.

7 people were killed and ten others were injured in a blast in Karachi.

Sindh Governor Imran Ismail took to his social media to condole the tragic loss of lives. He expressed grief over the death of National Assembly Member Alamgir Khan's father, as well as other victims who dies in the explosion near the Sher Shah Paracha Chowk area of Karachi. “Governor Sindh prays for the forgiveness of the deceased and elevation of ranks and prayers of patience for the bereaved,” his official account tweeted. 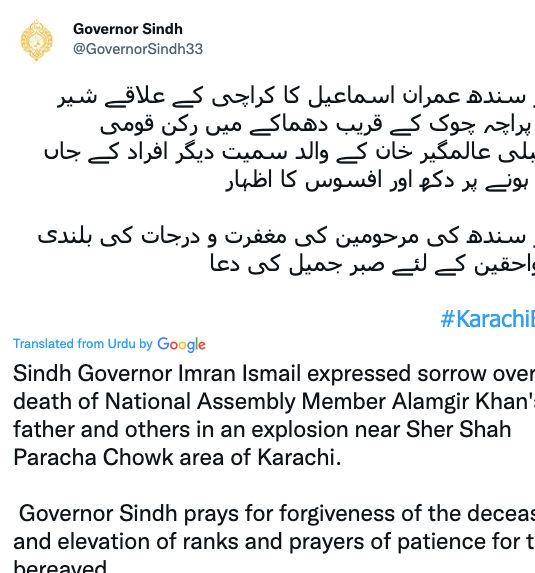 A heavy contingent of law enforcement agencies was rushed to the scene after the blast in Karachi. The internet services were snapped over the fear of threats posed by the terrorist faction Pakistani Taliban, Tehreek-e-Taliban Pakistan, or TTP. Imran Khan government announced a three-day holiday. The rescue teams launched a search operation to recover the bodies of those trapped in the two-storey building that was levelled due to the intense explosion. Sources told ARY News that the wounded were shifted to Civil Trauma Centre and Abbasi Shaheed Hospital. A-Bomb Disposal Squad (BDS) has speculated that the incident occurred due to the gas leak in its report.

“My heartfelt prayers and condolences go to all the families of victims of the twin blasts at Sher Shah Paracha Chowk, Karachi,” wrote the Pakistani Prime Minister Imran Khan on his official Twitter handle. “I am especially saddened to hear of the loss of our MNA Alamgir Khan’s father who also perished in the blast,” the Pakistani leader said. 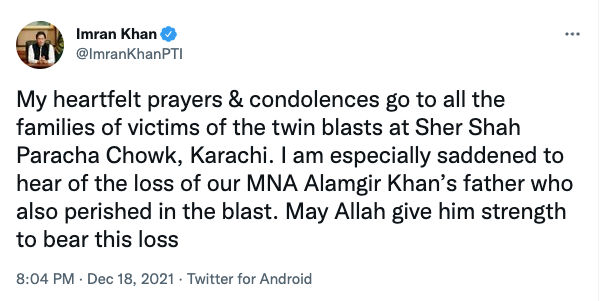 A spokesperson for the Karachi Police told The News that a blast took place in a gas pipeline running through a sewer hole located in the area. The intensity of the blast was severe, he said, quoting the bomb disposal unit's report adding that the building of a private bank was completely destroyed. There is no evidence at this time that the blast may be linked to terrorism. Sui Southern Gas Company (SSGC) in a contradictory statement meanwhile claimed that there was "no SSGC gas pipeline" in the area. All the gas pipelines installed in the area “are safe,” they noted, “and they have not incurred any damage.” The company instead said that the blast may have occurred inside the sewerage line.

"It is important to note that neither were flames visible nor was there any smell of natural gas in the area — which is a clear indication that the blast is not linked to any of SSGC's pipelines," the company reportedly said in a statement.