Former Prime Minister of Pakistan Imran Khan vowed to continue his protests against his successor Shehbaz Sharif until the announcement of fresh elections. 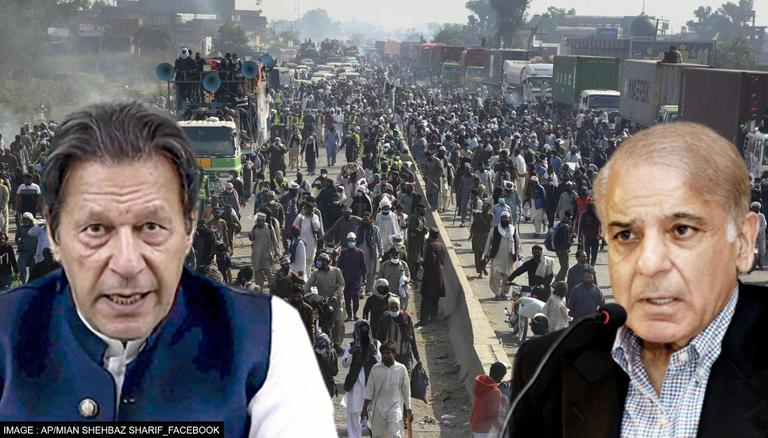 
Amid the ongoing political chaos in Islamabad, former Pakistani Prime Minister Imran Khan on Sunday vowed to continue his protests against his successor Shehbaz Sharif until the announcement of fresh elections in the nation. The chief of the Pakistan Tehreek-e-Insaf (PTI), Khan called on supporters to be prepared for rallies against the "imported" government amid the deteriorating economic situation in Pakistan. In a virtual address, Khan, who was ousted from power earlier this year, said it is a "national duty" to raise voices against the rising inflation.

Khan's call for new protest rallies comes at a time when Pakistan is reeling under crippling energy shortages and skyrocketing fuel prices. "Inflation has been massively increased by the present government which is affecting poor people," Khan said, as quoted by ARY News. "The national security and sovereignty will be compromised in return for seeking any kind of relaxation from the US. The present government that had organised an anti-inflation march during the PTI government has now massively hiked the diesel and petrol rates...," he added.

Adhering to calls by Khan, PTI supporters on Sunday descended to streets in Islamabad and various other cities in protest against the skyrocketing inflation in the country. Marchers rallied in Shahrah-e-Quaideen in Karachi, Hashtnagri Gate in Peshawar, and Liberty Chowk in Lahore. Demonstrators raised slogans against the incumbent government, prolonged blackouts, and blasphemous rise in food and fuel prices. Similar protests broke out in Rawalpindi and Islamabad as well. Khan addressed the marchers through video links and urged people to take to the streets against the ongoing crisis in the country, which he believes to be the result of a conspiracy between Sharif's administration and the US.

After the unprecedented fuel price hike, the inflation rate on Saturday in Pakistan increased by 3.38% compared to the previous week, the Dawn reported, citing the Sensitive Price Index (SPI). The rate is highest since the change of the base year for the measurement of SPI. Noting the developments, former Pakistan Finance Minister Shaukat Tarin projected an annual inflation range of 25% to 30%. This comes after petroleum prices in Pakistan were raised by PKR 84 and diesel by PKR 115, and whole electricity tariffs were raised by 50%.

Tarin blamed the PTI government and its deal with the International Monetary Fund (IMF) for the sky-high inflation in Pakistan. Khan, however, denied the allegations, saying his administration had capped the burgeoning prices despite pressure from the IMF. Khan went on to blame incumbent Pakistan PM Shehbaz Sharif and the sitting administration for being driven by "different motives...as they are not serious about giving relief to the nationals but dissolving (corruption) charges against them."