Indian Diplomat from Jammu & Kashmir Vimarsh Aryan at the UNHRC stated that the principles of self-determination as espoused by Pakistan pose 'severe dangers' to several countries where multi-ethnic and multi-religious' societies co-exist.

Furthermore said that what is portrayed by Pakistan as 'self-determination' is in fact 'state-sponsored cross-border terrorism' and the support branches to various aspects including 'military. finance, logistical support to terrorism against India'

Aryan emphasised that the "biggest problem" in Jammu and Kashmir thrives from cross-border terrorism by Pakistan and that the 'right to life' for the people of the state is violated. He further demanding the country to vacate POJK citing the violation of UNSC resolutions.

Aryan said, "Pakistan with its selective amnesia chooses to conveniently recall only parts of the UN resolutions by not meeting its primary obligation to first vacate the illegal occupation of PoJK. Pakistan should fulfill its commitments under the 1972 Simla Agreement and Lahore Declaration of 1999.

The Indian diplomat moreover reiterated that the entire Jammu and Kashmir is an 'integral part of India' and that Pakistan should not 'deceive the world' through its false narratives.

He added, "It is wishful thinking of Pakistan that it could deceive the world through its false and fanciful narratives on human rights. History has witnessed how Pakistan unleashed the most barbaric and dreadful atrocities that mankind could never imagine against millions of innocent civilians in 1971"

"Is it not an irony that a country with such distinction is making attempts to preach the world on human rights? We once again ask Pakistan to not waste the time of this esteemed Council by indulging in futile political propaganda, focus on your own dismal human rights record and work constructively for a safe, stable, secure and developed South Asian Region which is free from terror and violence," he said 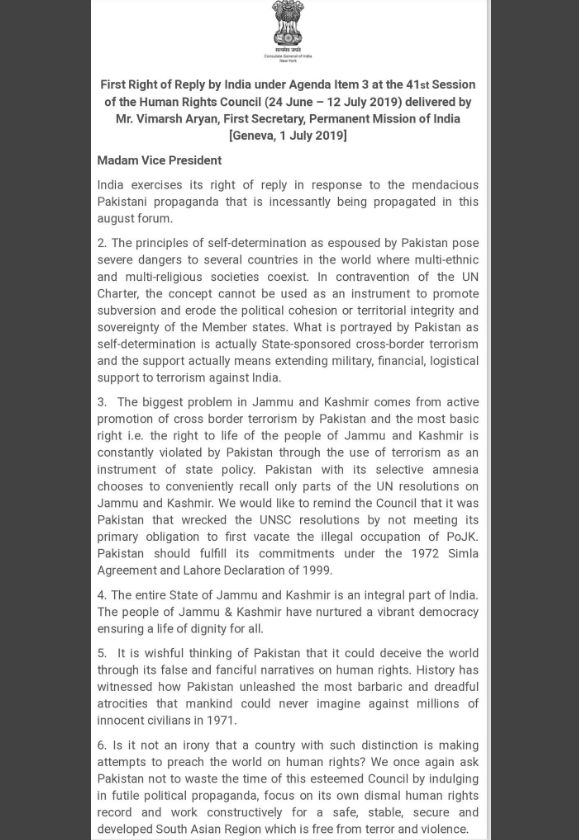