Sheikh Rasheed threatened that if the former Premier is jailed, then there will be a 'massive resistance' against the ruling government. 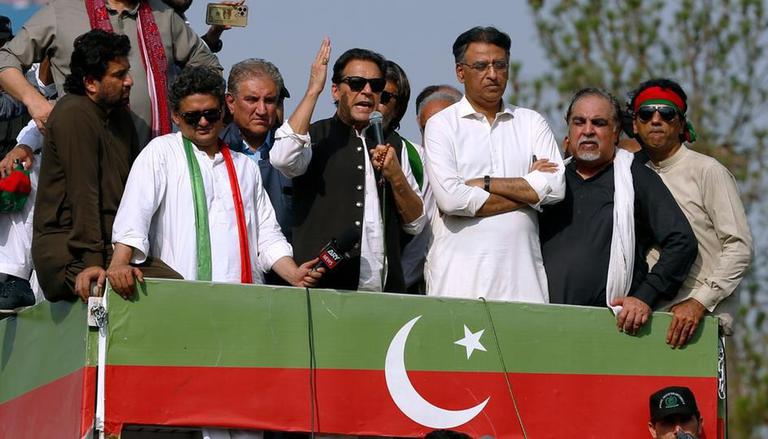 
'If the government uses force against the protestors, Pakistanis will siege Islamabad and there will be severe consequences', former Interior Minister Sheikh Rasheed warned on Thursday. With the Imran Khan-led Pakistan Tehreek-e-Insaf (PTI) announcing protests against the Election Commission of Pakistan (ECP) in Islamabad, Rasheed threatened that if the former Premier is jailed, then there will be a 'massive resistance' against the ruling government.

Protests have been announced by Imran Khan outside the ECP head office in Islamabad and ECP offices in Lahore and Peshawar. The agitation is expected to be attended by PTI lawmakers and a large number of activists reported ARY News. This comes after the Pakistan Election Commission announced the verdict in the PTI foreign funding case and ruled that the party received funding from 'prohibited sources'.

While speaking at a Live TV broadcast of ARY News' programme 'The Reporters', the ex-Interior Minister stated that despite receiving threats, Khan was independently roaming the whole country without getting afraid. Sheikh Rasheed remarked that as opposed to Khan, current rulers could not even visit their constituencies due to public outrage and asserted that the 'undeserving ruling coalition' had given a boost to the ex-PM's popularity. Rasheed claimed that 65% out of 75% of nationals were backing Imran Khan.

In the aftermath of the order, PTI's National Council meeting on Tuesday during which Imran Khan announced protests outside the ECP office and demanded the resignation of the Chief Election Commissioner (CEC).

"PTI will hold a peaceful protest out ECP office on Thursday against the conduct of Chief Election Commissioner (CEC) Sikander Sultan Raja," he said, demanding the immediate resignation of the election commissioner. He also accused the CEC of being "partisan and dishonest" and alleged that Sikandar Sultan Raja tried to sabotage the Electronic Voting Machines (EVMs).

On August 2, Pakistan's top election body ruled that Khan's PTI received prohibited funding from USA LLC, Bristol, Wootton Cricket Club (linked to Abraaj founder Arif Naqvi), and an Arab personality who pitched in a large sum of money. The ECP has accused Khan of making 'false declarations' before the elections in 2018.

The case was filed by PTI founding member Akbar S Babar who had alleged that there were financial irregularities in the PTI's funding from Pakistan and abroad. It was pending since November 14, 2014. The ruling of the Commission could trigger constitutional, criminal, and civil cases against PTI and its leadership.