After the Ashraf Ghani-led government was toppled, Pakistan's National Security Committee will meet to discuss the implications of the current situation. 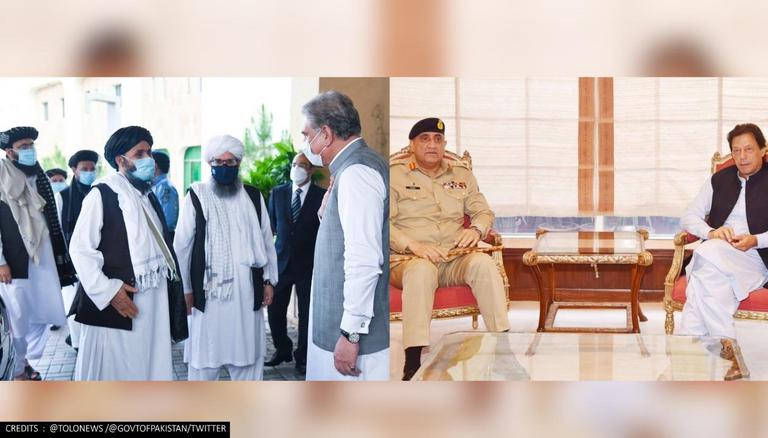 
After the Ashraf Ghani-led government was toppled, Pakistan's National Security Committee will meet on Monday to discuss the implications of the current situation. To be chaired by Pakistan PM Imran Khan, the meeting shall witness the participation of civil and military leaders including DG ISI Faiz Hameed and Army chief Qamar Javed Bajwa. The main issue which will reportedly come up for discussion is whether the country should recognise the Taliban regime in Afghanistan. This comes amid speculation that countries like China and Iran are also likely to recognise the new Afghanistan government.

As per reports in the Pakistani media, the Imran Kha n-led government has been pushing the terror outfit to not use the word 'Emirate' to avoid legitimacy issues. A day earlier, Pakistan's Foreign Ministry spokesperson Zahid Hafeez Chaudhri stated that his country will continue efforts for a "political settlement". Moreover, he added that the Pakistan embassy in Afghanistan is extending assistance to its citizens, Afghan nationals and diplomats.

Received a constructive call from @DominicRaab today. We discussed:

As the Taliban stormed into Kabul, Afghanistan president Ashraf Ghani fled the country with his associates and reportedly reached Tajikistan. In a statement released from an undisclosed location, Ghani remarked, "If left unchecked, countless patriots would be martyred and the city of Kabul would be devastated, resulting in a major humanitarian catastrophe in the six-million-strong city. The Taliban had made it clear that they were ready to carry out a bloody attack on all of Kabul and the people of Kabul Sharif. In order to prevent a flood of bloodshed, I decided to leave".

In another development, the US Department of State and the Defence Department revealed that nearly 6,000 US troops will be deployed at the Hamid Karzai International Airport in Kabul. They will ensure the safe evacuation of thousands of American citizens, locally employed staff of the US mission in Kabul and their kin besides vulnerable Afghan nationals over the next 48 hours. For now, the US has secured the airport perimeter thereby raising hopes of many waiting to leave the nation. Meanwhile, Taliban spokesperson Suhail Shaheen told the media that the terror group is aimed at forming an “open, inclusive Islamic government” in Afghanistan.